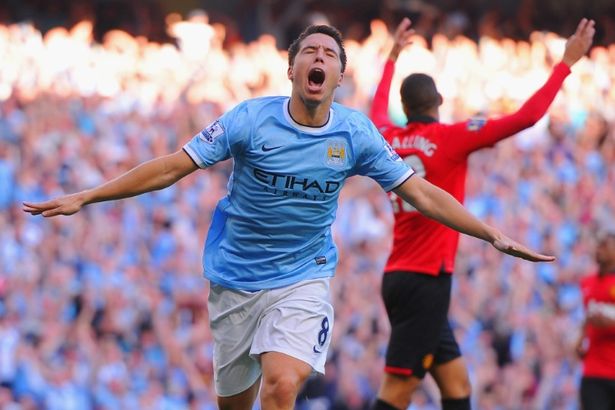 Despite a fine performance in last weekend’s derby against Manchester United a game in which Nasri scored one goal and had a part in another, Manchester City boss Manuel Pellegrini has told Nasri he must play to a top standard or will face the axe.

It was Nasri’s inconsistency that infuriated former manager Roberto Mancini, and Pellegrini has said that he will not put up with it.

“I talk often with him because I know he can be a big player,” said Pellegrini.

“I don’t talk about what happened in the past; but at this moment Nasri is playing very well.

“I am always wanting that level of performance from him. He knows he must play the way I know he can. If he doesn’t, maybe we have another choice [to make].

“But Nasri is absolutely committed with the team, with me, with all the other players. So we will be happy if we see a great Nasri the whole year.

“He has great technical quality. He works the whole game a lot, not just the last 25 minutes. He’s a very creative and classy player.”

Nasri has been pivotal in making sure that City have not missed not having David Silva available due to injury, and is expected to be in the team again today as they travel to Villa Park.

Pellegrini knows that much is expected from Manchester City after the way they defeated United but the Chilean is not taking the win lightly saying: “After we have beaten United it is easy for people to say we are going to win all our games.

“But we need to play every game with exactly the same focus, intensity and spirit we showed in the derby. Then our quality will maybe make a small difference.

“If you think you are going to win just with quality, then you are making a great mistake. We are not going to win by four or five goals every week.”

City striker Sergio Aguero will be missing from today’s game against Aston Villa, but both he and Silva are expected to be available for the home match against Bayern Munich on Wednesday.