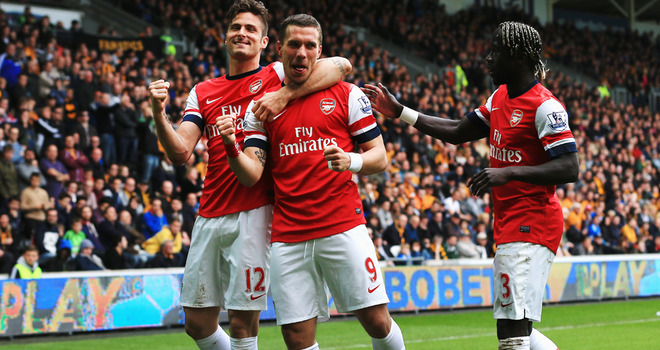 Arsenal’s German international defender Per Mertesacker believes the Gunners are now back on track with leading players returning from injury to ensure that the club has a strong finish which will secure them fourth place in the league and Champions League football next season.

Despite faltering somewhat in March the German thinks that their upturn in form has considered with the return of Aaron Ramsey and the fact that Lukas Podolski is scoring goals.

The big German feels that Arsenal was hampered by injuries and that Mesut Özil coming back to the team will help them finish in fourth place.

“We need these moments where you can see we’ve got great players and some great finishers with Lukas Podolski on the score sheet and Aaron Ramsey back on track, Mesut back on track,” Mertesacker told the club’s official website. “All these players could make a difference.

“When you have your whole squad together for as long as possible, that can make a difference. We suffered a bit in the second part of the season but now everyone is… coming back to full fitness. We’ve had some long-term injuries and it’s good to have them all back.”

Mertesacker added: “We have the potential to be a very promising side in terms of title races, but if you can’t keep your leading players fit all the time it makes it a lot more difficult.

“We are determined to keep fourth position.”

Mertesacker was delighted at the 3-0 away win over Hull City at the weekend saying: “I think at the start, Hull played very well, they put pressure on us all the time.

They played with two strikers (Nikica) Jelavic and (Shane) Long. They played quite decent together as well so it was quite tough.

“We were lucky [at times] but overall when it was really, really close we had a good response.

“I think the whole team has to switch on quicker than normal to avoid those balls behind us [when we face two strikers]. I got booked very early so I always had to be aware.

“To cover each other is a vital point. We didn’t do enough of that in the first 15 or 20 minutes but after it was much easier, especially in the second half, we got more possession, we were more dangerous and we’ve got some decent finishers in our team as well.

“That made it much easier in the second half to have better possession and play all the way through. We didn’t lose a lot of balls in the middle of the park, that’s what hurts us a lot. But we avoided that.”