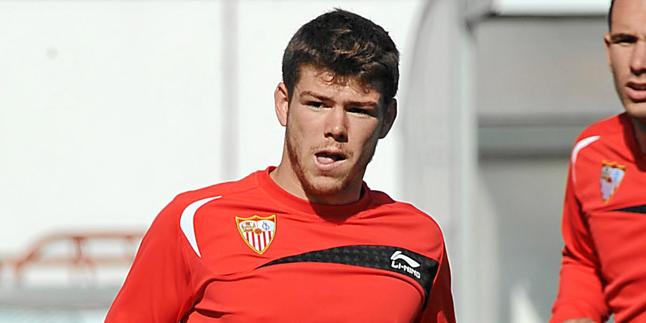 Reports coming out of Spain are suggesting that Manchester United are lining up Seville’s Alberto Moreno as a replacement for Patrice Evra.
According to Estadio Deportivo United are ready to compete with Chelsea for the 21-year-old who just made his debut for the Spanish national team.
The Spanish newspaper claims that United will have money to spend in January for not only Moreno, but also for Real Sociedad’s Antoine Griezmann and Porto pair Eliaquim Mangala and Nicolas Otamendi.
Seville president Maria del Nido has already made it clear that any club going after Moreno will have to meet the player’s £25 million buyout clause, which will have United trying to decide if he is value for money.
Evra is expected to leave in the summer when his contract is up at which time United were expected to rekindle their interest in Leighton Baines, but given the England international is 28-years-old, and the money Everton would demand it appears that both Real Madrid’s Fabio Coentrao and Saint Etienne’s Faouzi Ghoulam could offer a better option.