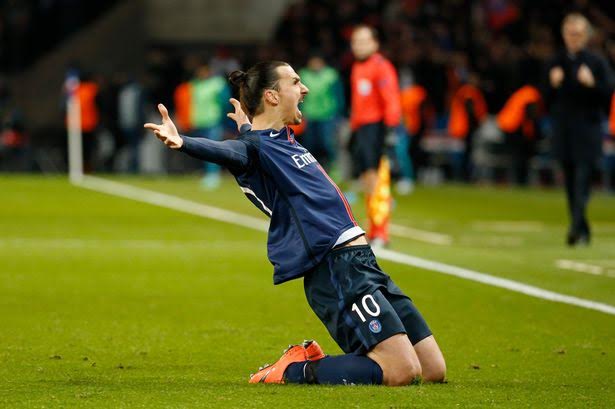 Paris Saint-Germain striker, Zlatan Ibrahimovic has revealed that “big things will happen” when he leaves the French Champions at the end of the season, leading us to speculate that he may be preparing to link up with Jose Mourinho at Manchester United.

Before this latest news about the Swedish international, it is believed that a deal is in place for him to end his career in the United States playing for David Beckham’s Major League Soccer franchise, that the former Manchester United star is putting together in Miami.

Beckham’s new team is not set to launch until 2018, which means that the 34-year-old is without a club for next season.

With this in mind the Daily Mirror asked if the possibility of a move to the Premiership was on the cards, leading the charismatic striker to say: “I have another three months here and then what will happen? Big things will happen. Let’s see what happens.”

When the Premier League was mentioned, Ibrahimovic added: “Let’s just say I am in shape for it.”

Former Chelsea manager, Jose Mourinho and Ibrahimovic have remained friends since their time together at Inter Milan, and it is thought that before his sacking the Portuguese’s manager was trying to lure the 6ft 5in front-man to Chelsea.

And now with everyone assuming Mourinho will take over from Louis van Gaal, he could try and get Ibrahimovic to join him at Old Trafford.

Meanwhile club chairman Ed Woodward knows a commercial opportunity when he sees it, knowing that despite the Swedes aging years he is still one of the most marketable names in the world of football it could tempt him to try and do a deal.

Looking at a deal on a purely commercial point of view it makes a lot of sense, with United being able to sign Ibrahimovic as a free transfer on a one year contract.

Even if the club has to pay him in excess of £200,000 per-week, surely his commercial value and the fact he is still one of the world’s best strikers, as was evident in his display Tuesday night during PSG’s 2-1 win over Chelsea in the Champions League means it is like hitting a homerun for Red Devils if they can bring him to England.

For now at least Ibrahimovic is focused on Paris Saint-Germain’s fortunes and admits the club still face a tough battle with Chelsea, despite having won the first-leg of their Champions League last-16 tie at the Parc des Princes.

He said: “Two years ago we won 3-1 in the first leg against Chelsea and we still didn’t do it, so it’s unpredictable.

“But if we play the way we did in the first leg, we’re confident of going through. And we want to play in this positive manner wherever we go.

“I think Chelsea is a fantastic team. Because they are not doing as well as they normally do in the Premier League, it doesn’t mean it is a weak team, it is a strong team.

“They have fantastic players and we knew it wouldn’t be easy – we have a second leg to play and anything could happen.”