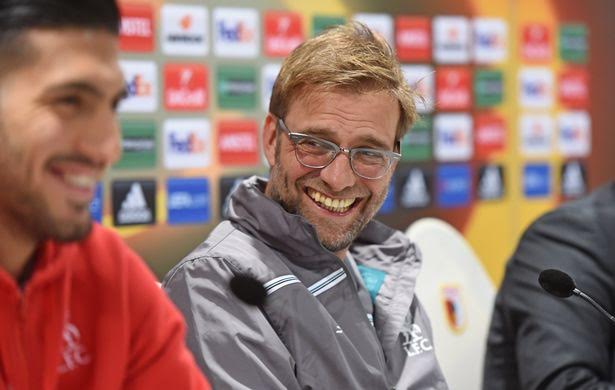 As Liverpool fans settle back down to reality following the six goal thumping of Aston Villa at the weekend it is back to the serious business of the Europa League.

Down the years the UEFA Cup as it used to be called has been kind to Liverpool, and with the Reds looking as though a top four finish is now too far of a reach sitting nine points behind fourth place Manchester City.

The Europa League looks as though it could be Liverpool’s best hope of Champions League football next season, something that manager Jürgen Klopp is well aware of.

“How many points in the league are we away from the Champions League? I think it is nine. So, yeah, at this moment I would say we have a better chance this way at the moment.

“Maybe the top four clubs will have a crisis. But we have to solve our own problems. We have to be at the highest motivation for the game.

“For sure the Europa League is not the shortest way to get to the Champions League. It’s a really hard way and not the normal road.

“But the chance to qualify for the Champions League makes it more interesting. Ask Sevilla who would have qualified many times if the rule was in place.”

Part of Liverpool’s problem in the league prior to the match against Aston Villa was the fact that with some many players out injured and a packed schedule to deal with Klopp was limited with his team selection.

Now with the return of Daniel Sturridge, Philippe Coutinho and Divock Origi and the fact Liverpool does not play at the weekend, Klopp admits that there is no need to make changes from the team that beat Villa.

“We haven’t been able to pick a consistent team so far for different reasons,” Klopp added.

“If you have a pre-season and no injuries then you can play a lot of times with a similar if not the same team. The biggest teams in the world are doing this.

“I don’t want to compare ourselves with Barcelona but three of these players play all of the time.

“I cannot think of a game when Cristiano Ronaldo has not played in the last six or seven years. It is all about being fit and being in the rhythm.

“What we have tried to do so far is pick a team to go to the next round or to win the game.

“The Premier League for us is the most important tournament. At this moment we are three points behind in qualifying for the Europa League (via our league position).

“There is a lot consider. We don’t want to judge because of a tournament, we judge based on rhythm, form, shape and the possibility to beat the opponent. We haven’t been able to do this until now (because of injuries). This is the truth and you know this. It is one of the reasons why we have not got the biggest consistency.

“We then have a final (on the Sunday). Before a final you don’t have to think about anything because you don’t need to be recovered. You could play the final on Friday!

“In the end I will make decisions and you will sit in your chair and criticise or not.”

So there you have it from the boss, which means if he is true to his word we can expect to see the same team that started last weekend.

The only possible change we can see is perhaps Lucas in for Henderson, but we will stick with the team captain for now.