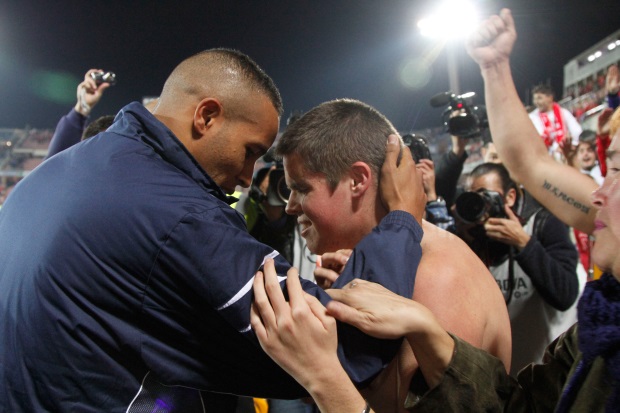 “Blindness prevents me seeing; but it allows me to feel”

Granada CF striker Youseff El-Arabi went straight to the stands following his side’s victory over Malaga a match in which he scored a hat-trick in order to meet his number one fan a young blind boy named Migue.

The local derby 3-1 win was one of the highlights of the season for all Granada fans as they watched Moroccan international Youseff El-Arabi score all three of their goals.

One young fan never gets to see the goals yet he soaks up all the noise and excitement of the match with the rest of the fans at the Nuevo Los Cármenes experiencing the highs and the lows of the team when they win or when they lose.

Despite being blind from birth 17-year-old Migue loves football and especially his home team Granada who he follows through thick and thin.

His older brother Pepe said: “It doesn’t matter that he can’t see.” Proud of the fact that Migue, despite being blind leads a full and active life enjoying many outdoor sports which includes skiing in the nearby Sierra Nevada Mountains.

All the other fans at the Nuevo Los Cármenes stadium know Migue well as he never misses a game accompanied by his older brother Pepe who talks him through all the action that is happening during the match.

After the game with Malaga, star striker El-Arabi made his way over to the Malayerba section of the stadium where Migue always goes to give his number one fan the match ball, and to thank him for his support.