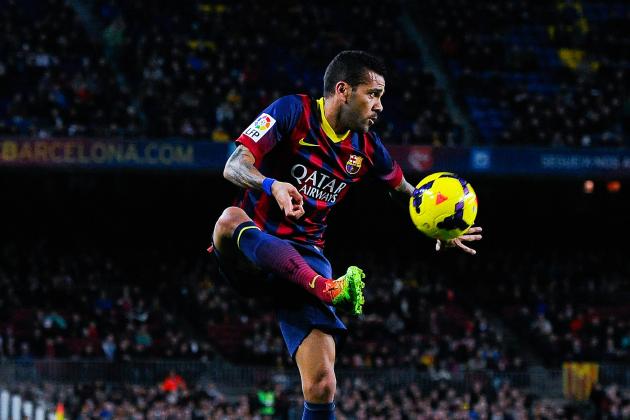 During a recent interview with a Barcelona radio station RAC1 the Brazilian made it clear that unless the negative energy surrounding the Nou Camp changes he will be looking to move on this summer.

Reports in the French press are already saying that he will join Paris Saint-Germain, but with nothing yet official it leaves the door open for Arsenal to make a move and sign a world class replacement for Bacary Sagna who looks destined now to leave the Gunners after turning down every offer the club has made to keep him.

According to the pundits at talkSPORT it would be an opportunity that Arsenal would be ill advised to miss as no one matches the Brazilian in this position, and by signing him it would be a move designed to show that they are prepared to mount a determined challenge to win the Premiership next season.

Not only does Alves possess all the necessary skills he also brings with him the experience and winning mentality that would help the team in so many ways having won more competitions than any player on the current Arsenal team which includes two Champions League titles, two UEFA Cups and countless league trophies.

The only downside we can see here at Soccer Transfers is his age and salary, but if Arsene Wenger and Arsenal are serious about winning titles then Alves would be too good an opportunity to pass up as he could be that one piece of the puzzle that Arsenal needs to be a truly remarkable team.