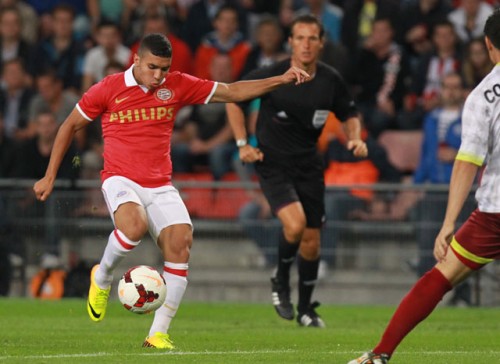 A few months ago Arsene Wenger expressed regret on the players that that he missed out on signing in that last few years, while some of those players came close to joining the club before other intervening factors altered their destination, few factors have affected transfers in recent years like the financial muscle of clubs like Chelsea and Manchester City.

The financial capacity of these clubs contributed to Arsenal missing out on signing such as Eden Hazard and Juan Mata.

The financial might of Chelsea means Arsenal have lost to out on several targets in recent years, and that trend is set to continue as PSV midfielder Zakaria Bakkali is reportedly set to join Chelsea. The 18 year old has drawn comparison with his Belgian compatriot Eden Hazard.

Fans are always quick to engage in gnashing of teeth when an alleged target ends up at a rival club without a rational view of whether such a player is needed.

Zakaria Bakkali is just 18, and might join the bandwagon of young players that have been lured to Chelsea in recent years. But the reality on ground is that Arsenal does not need him.

No doubt he is quite an exciting talent, and he holds the record as the youngest scorer of a hat trick in the Eredivise in the Netherlands, yet he is another midget who stands at just 5ft 4in, when the club is crying out for more physical players, and players with height, the club should not be seen increasing the number of players in its squad who are similar to what is on ground.

The present Arsenal squad is unbalanced because it is devoid of players who have the height and physique to add some steel to the team.

There is always excitement when certain players are linked to the club, such excitement are seldom extended to young players already at the club.

For all the excitement that Zakaria Bakkali has generated for his performances in the Dutch league, there is a player at Arsenal who is of similar age as the Morocco born midfielder that has lit up Arsenal’s youth set up. He is Daniel Crowley.

The youngster has consistently produced scintillating performance this season for the Under-19s and Under-21s, but little significance is placed on his displays because of course he is playing at lower level, whereas, Zakaria Bakkali heralded as the class act in the making because he has had the opportunity of trotting his stuff in the Eredivise where young players are introduced into the teams at a young age.

No doubt, if Daniel Crowley has the same opportunity he could equal the fit of Zakaria Bakkali or even surpass it.

The bottom line is that Arsenal does not need anymore young players that might not be better than what the club has on ground.

Many frown when Arsene Wenger brought in Yaya Sanogo, when there was already Benik Afobe and Chuba Akpom as young strikers at the club. Few would have preferred to see Afobe and Akpom given opportunities, instead of a raw Yaya Sanogo who is yet to score for the club.

This is not to say young players should not be signed, but using Arsene Wenger’s words they should be of top, top quality.