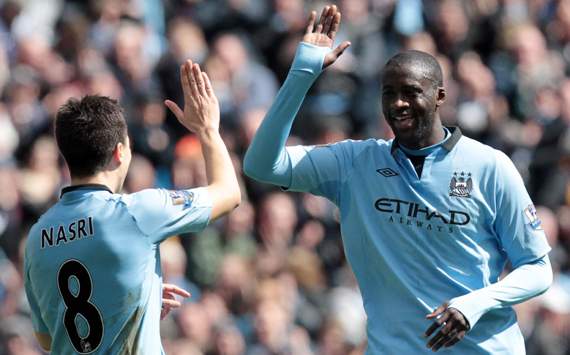 Since Yaya Toure’s representative or manager decried Manchester City’s treatment of the player on his birthday, claiming the club doesn’t value his player enough, speculations linking the player away from the Etihad stadium had been on and off media spaces.

Now, the reports according to The Times has surfaced that Manuel Pellegrini’s Manchester City are considering the sale of their Ivorian power house, Yaya Toure.

Toure had been a very important figure in the current Manchester City squad since joining them from Barcelona in 2010, helping the Citizens secure two English Premier League titles in 2011/2012 and the recently wrapped up 2013/2014 season.

Toure’s contract at the Etihad is nearing the last 2 years and the club is reportedly ready to sell one of their top earners on £210, 000-a-week.

Probably from Toure’s desire to leave and/or Manuel Pellegrini’s intention to do away with an unhappy player, it has been reported that Toure, one of City’s best performers, would be shipped off to another club next summer and would be replaced by a like player, Paul Pogba, the former Manchester United player, who now plays for Juventus in Italy, Ross Barkley, the impressive young midfielder from Everton or Marco Reus of Borussia Dortmund.

The report says that Manchester City are considering the sale of Toure to gather and free up funds for the signing of one of Pogba, Barkley and Reus.

Financial Fair Play regulations have limited Manchester City’s exorbitant and flamboyant spending and hence the decision to sell before buying.

Also important in the report is the talk of interests from Arsenal, Manchester United, Chelsea and Liverpool on the player.

Manchester City may be reluctant to sell Toure, 31, to English Premier League rivals but if they so decide, then the club with the most likely chance to snap the player up would be interesting to know.

It is very doubtful if Chelsea and Manchester United would think in Yaya Toure’s direction as a result of the presence of like players and financial constraints.

For Chelsea, it isn’t likely that Jose Mourinho would splash the cash to bring in a 31-year-old player with valuation in excess of £20m who plays in a department where the club is well endowed, without offloading a key player in the squad.

If we follow the argument that Yaya Toure is a defensive midfielder, then the presence of Nemanja Matic and John Obi Mikel, who are fine performers any day, would put paid to the signing of the Ivorian.

Also as a box-to-box midfielder, Mourinho would have to sell one of Oscar, Cesc Fabregas, Ramires and Eden Hazard to land Yaya Toure.

It wouldn’t be like Mourinho to sell a younger and impressive player to favour a move for older and declining one.

Manchester United also may not deal in Yaya Toure’s direction as Marouane Fellaini is a Toure-like player with the abilities to play as defensive midfielder and a box-to-box midfielder.

United just signed Ander Herrera and Daley Blind this summer and their signings would be in vain of a 31-year-old Toure is favoured over them for the midfield position at Old Trafford.

For Liverpool and Arsenal, Yaya Toure’s capture may turn around their fortunes for at least the next 2 seasons as both clubs could do with a strong defensive midfielder or a midfield enforcer no matter the age.

Liverpool has an ageing Steven Gerrard alongside Henderson, Coutinho, Sterling, Lallana, Allen and a host of non performing midfielders but manager Brendan Rogers could play bring Yaya Toure in to join his elder brother Kolo and add steel to their failing midfield.

For Arsenal, the need of a defensive midfielder is very important to the success of the club this term as Mikel Arteta and Mathieu Flamini are both over 30 and are fast losing pace and energies to execute their jobs as anchormen for the club.

Arsenal could also do with Toure to act as cover either defensively or offensive for the fluid midfield it possesses.

It is however very unlikely that Arsene Wenger would bring in Yaya Toure, a 31-year-old player to replace Mikel Arteta, 33 and Mathieu Flamini, 30 as Wenger desires a long term plan for that position.

The manager is not also likely to sell Ozil, Sanchez, Ramsey, Wilshere or Chamberlain because he wants to sign Yaya Toure.

Therefore, speculatively, Liverpool stands the best chance to land the Ivory Coast midfield enforcer, as they have a couple of defensive and attacking midfield players they can offload to sign Toure.

Players like Lukas Levia, Joe Allen and the likes could be sold for some cash to land Toure.