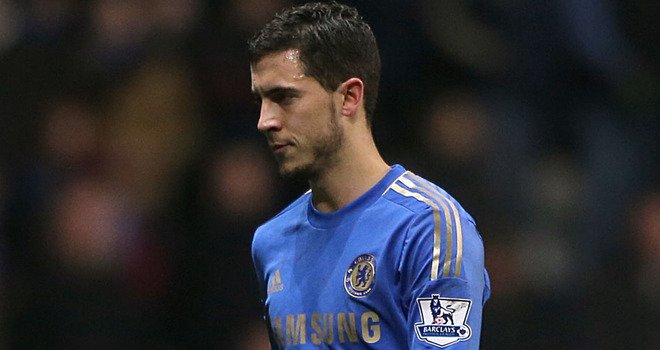 Eden Hazard has once again played down speculations linking him to European champions Real Madrid by claiming Chelsea are the club that makes him ‘dream’.

The 23-year-old Belgian forward has been linked to a host of super rich European clubs with Real Madrid and Paris Saint-Germain being the front runners. He has however dismissed those rumours stating that only Chelsea makes him ‘dream’.

Hazard was on French TV Canal+ to discuss the big game between PSG and Olympique Marseille and was once again asked about his supposed interest in moving to Real Madrid. The player was quick to respond,

We have played against all the big teams and we are in first place. I hope we can stay there”.

Hazard has been linked to real Madrid after it emerged that the Los Blancos are ready to sell their world record transfer man Gareth Bale to Manchester United and have identified the former Lille of France playmaker as the ideal replacement. It is believed that Madrid is ready to break the 90million record fee they paid to sign Bale in order to get Hazard.

Hazard was also asked about a return to Ligue 1 with interest from champions PSG and here’s what the player has to say.

“Paris Saint-Germain have huge players, but Chelsea have more experience and more players in certain positions. And we have a better experience in the Champions League.”

Hazard was linked to PSG all summer but no approach was made by the club and everything has remained mere speculations. Hazard has however cleared the air once again about his intentions to continue on the Blue side of London.

This will be good music to the ears of Chelsea faithful’s who wouldn’t want the club to loose one of its best player.

Hazard has been phenomenal for Chelsea since moving to the 2012 European champions shortly after the club won its first Uefa Champions League title. He won the club’s as well as the Players’ player of the year last season and was also named in the PFA team of the year for 2013/14 season.

He has been in good form for the club this season combining well with Oscar and new recruits Fabregas and Costa in attack for Chelsea. Their collective rich vein of form has seen Chelsea top the league table and is also doing well in their Champions League group.

It will be a great delight to see Hazard who also has his younger brother Thorgan in Chelsea ranks continue his career in the BPL even as it is believed that he is one of the young players who would take over from Lionel Messi and Cristiano Ronaldo when they eventually quit the football scene.

His links to Real Madrid and PSG will remain mere speculations as both clubs are yet to make any official approach and Hazard would clear the air once again on his stance.