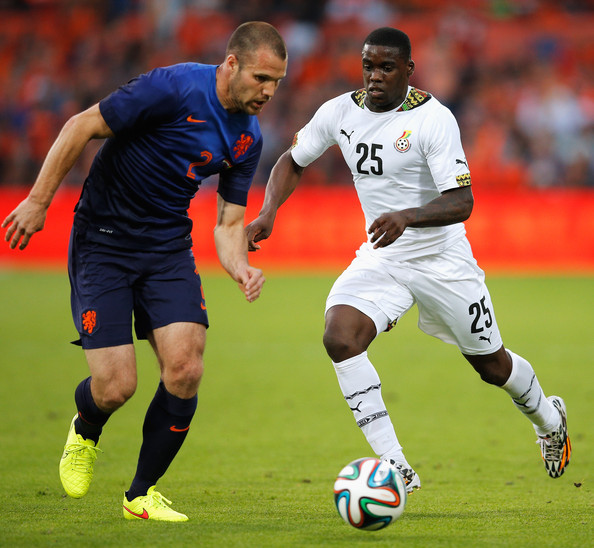 Jeffrey Schlupp has made a revelation that he would be stupid to turn down a move to Manchester United, if the North West side came calling in the summer.

Schlupp came through the Leicester academy after moving to the United Kingdom from Germany. Last season the Ghana international 23, played 32 league games making him the third highest most featured Leicester player last season.

This season, it seems the left wing back has lost his place to Austrian Christian Fuchs after suffering a lingering hamstring injury which has restricted him to just 21 league games with 13 as a starter. For this reason, the African according to transferrumours.co.uk could be on his way out of Leicester City this summer.

Manchester United are certainly in need of another left back especially as Luke Shaw after nine months on the sideline due to injury may not get back to the level he was before the injury. United have been linked with so many left backs in the market but Jeffrey Schlupp will offer the Red devils a cheaper and readily available option.

Schlupp had this to say to the Sunday Mirror before the United game, “I don’t think I could ever turn down a move to Manchester United, but I didn’t get the opportunity at the time .

“The trial I had moulded me into the player I am today.

“But Leicester City is my club, it has always been my club, and I’m very grateful to be here now.

“I was at United for six weeks. It was supposed to be a week to start off, just to have a look at things , but it got extended and I found myself training with the first-team and the Under-21’s”, he concluded.

Still 23 with pace and trickery which has seen him win 61% of his take-ons this season, then it is safe to say that he is indeed one that big clubs and not just Manchester United will attempt to sign in the summer.