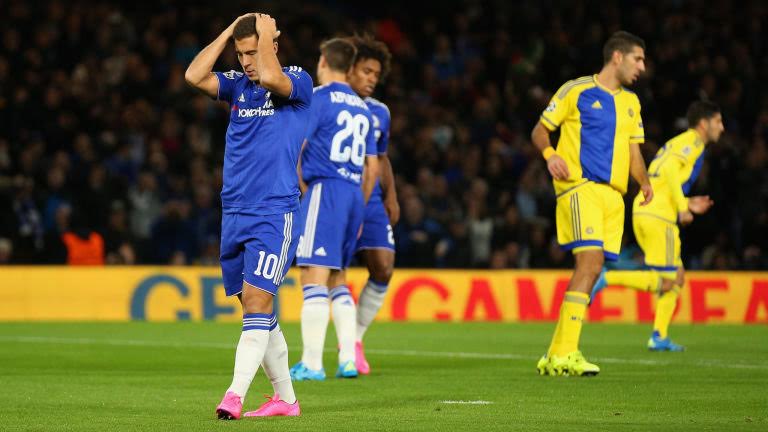 Last season’s PFA Player of the Year Eden Hazard has gotten off to a slow start this campaign looking nowhere near the man who terrorized defences with his trickery, and the misery continued for the Belgium star last night against Maccabi Tel Aviv as he nervously ballooned the ball over the crossbar when taking a penalty.

Sky Sports football pundit Matt Le Tissier has said that Hazards form must be a big worry for Mourinho ahead of this weekend’s match against Arsenal.

He said: “This boy does not look like the same person that shone so brightly last season.

“He really is out of sorts. You could see that from the penalty. With his penalties he always looks at the goalkeepers anyway but this time he looks at the ‘keeper, looks down, then looks up again.

“As he’s going to take this penalty and I don’t know if he’s seen the goalkeeper move the way he’s going to hit the ball and panics slightly but he skies it miles over the crossbar. There’s a real lack of confidence in his play at the minute.”

Le Tissier added: “Even after missing that early penalty you didn’t think Chelsea were going to be in any kind of trouble.

“The only thing really was whether they could keep a clean sheet as they hadn’t in a while and they almost did blow that at the end when the visitors missed a simple chance. But they got the clean sheet and it was a comfortable night all round.”

In the end Chelsea were 4-0 winners, and would like to keep the momentum going when they kick off at lunchtime on Saturday against a visiting Arsenal.