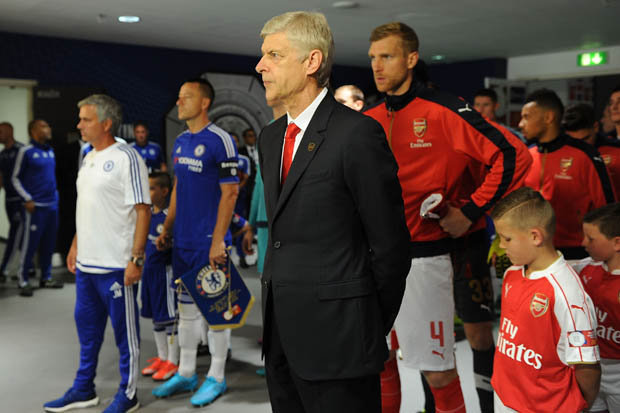 Arsenal manager Arsene Wenger added petro to the fire that already rages between him and Chelsea boss Jose Mourinho yesterday by refusing to shake the Portuguese managers hand following Arsenals 1-0 win in the Community Shield at Wembley.

The Blues boss stood ready to congratulate Wenger at the end of the match, but the Frenchman ignored him completely and just headed straight for the tunnel.

The Blues boss who had already tossed his losers medal into the crowd said: “You only miss me if you want to miss me.

“Every Arsenal player come in my direction, which was the easiest thing to do, because I was just there.

“If other people didn’t come in my direction, that’s not the end of the world. I don’t want any more comment on that. I did my job, the job my club deserves me to do.”

The soon to be 66-year-old Wenger however played down any significance in snubbing the man who last season called him an “expert in failure”, saying: “I shook a few hands today. Nothing special there. I believe in a job where you have to respect people.”

Mourinho also accused the Gunner boss of abandoning his philosophy of playing attractive attacking football claiming that Once Arsenal were in the lead Wenger parked the bus in front of goal.

He said: “We were the best team. We controlled the game by having ball possession. Arsenal defended with 10 players, they put everybody in front of their own line.”

Wenger however hit back at Mourinho saying: “We defended because maybe it was a bit of a psychological hurdle, Chelsea, in the head of my players. They were more concerned once we were 1-0 up to protect our lead than to play.

“I don’t think that’s giving up your philosophy. It’s just a fact that in a game like that, we wanted to win, we behaved like that. I’m quite proud of that.”

Wenger also had praise for new signing Petr Cech after having gone up against his former teammates so soon after swapping Chelsea for Arsenal.

The Frenchman said: “He did well and maybe he had an influence on the Chelsea players as well. They feel to score against him they have to score the perfect goal. When you have that sometimes you try too hard.”

If this is how it is going to be before the season even gets under way, it would appear as though both managers are bound to butt heads again once the season kicks-off next weekend.