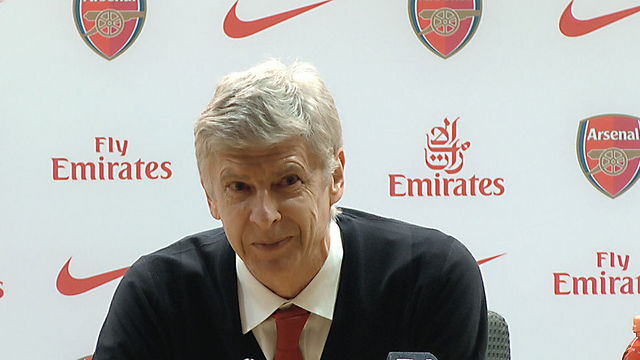 Arsenal manager Arsene Wenger is refusing to say where he thinks Arsenal should prioritize and whether winning the FA Cup is more important than qualifying for the Champions League.

At the moment the 64-year-old Frenchman says he is looking no further than this Saturdays FA Cup semi-final against Wigan.

While speaking at his pre-match press conference Wenger said: “I will not choose because we must respond well after our game against Everton last week because that’s where our future lies.

“We need to have the capacity to respond with a strong performance in the next game. It is important to focus on Wigan who have already beaten Man City this season at Man City – as well as last year’s final – and we respect Wigan for that.”

The Gunners boss was also asked if he plans a major overhaul in the summer to which he replied: “Let’s see where we finish this season. We have the basics in place and we must get our players back and available. Our main task will be to keep the team together and think about where we went wrong because there have been a lot of positives in our season.

“There is no perfect team and we will always try to improve our squad and our team.

We have been the league leader 17 times but dropped off when we lost our players at the important moments of the season and we don’t’ want to repeat that.”

As far as the match against Wigan is concerned Wenger admits that he has a lot of uncertainties: “We have a lot of uncertainties. It is very difficult to give you any percentage because we have Kieron Gibbs, Tomas Rosicky and Alex Oxlade-Chamberlain all at the moment not available and we will make late decisions on all three.

“Certainly I will decide to start Aaron Ramsey because Mathieu Flamini is suspended. Jack Wilshere has not started to run. I think that is planned next week. At the moment all is going well.”