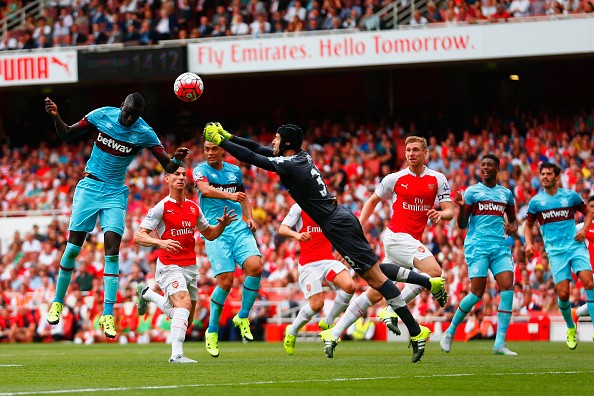 Arsenal new signing Petr Cech had a nightmare game letting in two goals on his debut for Arsenal following what was seen as a massive let-down by the fans, who had high expectations of the Gunners running rampant over the east London opponents.

Speaking after the match Arsenal boss Wenger said: “Our performance was not convincing. On the two aspects of our game, going forward and defending, overall we were punished. On top of that, we gave two very cheap goals away.

“I haven’t spoken to Cech. But I can’t see many convincing individual performances today. It’s difficult to single one player out.

“It’s not only him (Cech), we have enough experience at the back. If you look at our backline, the youngest one is 30. We are maybe guilty at 0-0 to give them a goal as soft as that.

“It was a defensive lapse. A collective lapse. There are many things to say about that. I knew that if the delivery was good, we would be in trouble, even before the free-kick was taken.

“The concentration maybe was not completely there on the set-piece, the organisation was not perfect. The positional play, we were too far from our goal. We gave him too much distance to run into. We killed ourselves.

“When you are a professional football player, you face your responsibilities and not always look at something else. Today, we have to look at ourselves and think that we were not good enough.

“We were not good enough, we were not convincing and that’s basically it. And West Ham played well. Congratulations to them. Hopefully we can bounce back quickly.”