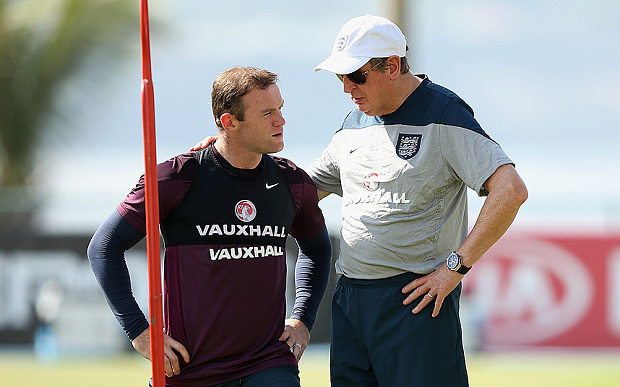 Former England captain, Steven Gerard retired at the end of 2014 FIFA world cup and Frank Lampard together with Ashley Cole has followed suit leaving Wayne Rooney as the longest serving English player in the squad.

Although many expected Wayne to get the captain armband but few believes he is capable of taking the Three Lions to days of glory.

Wayne Rooney has captained the English National team on two occasions and he’s presently the most experienced member of the team amazing 95 caps with 40 goals leaving him nine goals behind all-time highest goal scorer, Bobby Chalton.

The striker will hope to help lead the Three Lions to success during his time as the skipper with the club known to be underachievers.

Wayne Rooney made his international debut against Australia in 2003 at the age of 17 which saw him became the youngest player to play for the Three Lions back them, a record later broken by Arsenal’s Theo Walcott.

Wayne Rooney is also the youngest English goal scorer. Wayne Rooney who is delighted to be named the England captain sees it as a dream come true.

The Manchester United skipper promised to do his possible best in helping the team.

Rooney’s time in England saw him play under different managers and captains and he himself believes he has learnt a lot of things from all the different personalities he’s worked with which will help him in carrying out his duties diligently.

Roy Hodgson announced Wayne Rooney as the captain on Thursday and believes Wayne is a very good choice for the position due to his level of commitment, experience and responsibilities to the team.

The fact that he is already in charge as Manchester United captain will also help him according to the manager who feels the responsibilities in Manchester United will make Wayne Rooney a better skipper for the English national team.

The manager disclosed in an interview: ‘I’m pleased to say, I’ve been able to offer it to him. I’ve had a long conversation with him and he’s prepared to accept the pressures that the England captaincy brings. It’s important that the players wants to take on that enormous responsibility.”

Wayne Rooney is the fourth Manchester United player to be named as captain of the English national team on a permanent basis following in the footsteps of predecessors Bryan Robson, David Beckham and Rio Ferdinand.

Wayne Rooney’s first match as the Three Lions captain will be against Norway at the Wembley on 3rd September, 2014.