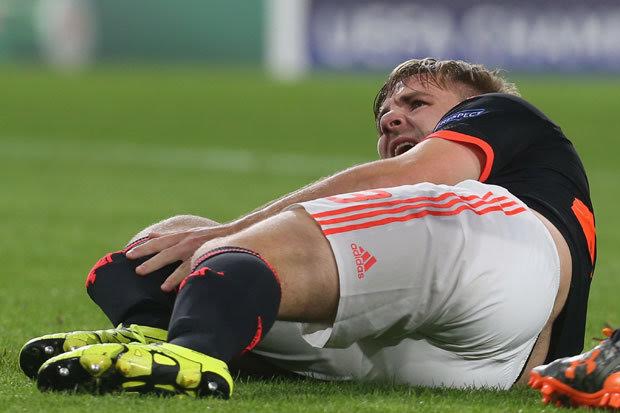 The England left-back was treated on the pitch for ten minutes by doctors after suffering what is now known to be a broken leg, and is certain to be out for the rest of the season as United suffered a 2-1 loss in their return to the Champions League.

“Luke is in hospital, he will be transferred with us, maybe, otherwise a day later and shall be operated in Manchester probably.

“The boy is in his second season and he has been playing fantastic. And now this happens.

“He had the oxygen mask on and was crying in the dressing room.”

The 20-year-old was stretchered from the pitch wearing an oxygen mask with his leg in a splint while his fellow teammates could not bear to look on their fallen comrade.

Van Gaal went on to blast the referee Nicola Rizzoli for not booking the PSV defender for the horrific tackle.

He added: “If I say it was a penalty and a red card then I am a bad loser.

“It was a very bad tackle.”

To add to United’s night of misery, Moreno headed PSV’s equaliser after Memphis had opened the scoring against his former club.

It was not to be United’s night however when Luciano Narsingh headed a second early in the second half.

Van Gaal added: ‘We dominate the game, create chances but we are not finishing.”