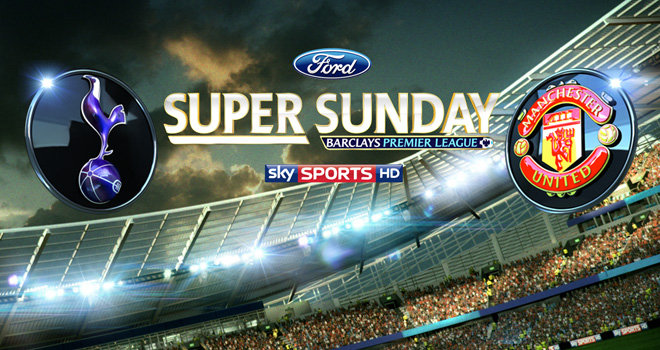 Tottenham will be looking to put last weekends 0-6 loss to Manchester City behind them as they prepare to take on last season Champions Manchester United at White Hart Lane.

Spurs manager Andres Villas-Boas future at the club came up following the loss but the Portuguese manager dismissed all talk of him being sacked, and knows that the best way to silence his critics would be a home win against United that would put Tottenham back in the Premiership title race still only four points off second place.

A midweek trek to the Arctic Circle to play Tromso in the Europa League was not the kind of preparation that AVB would have been hoping for, but the two goal win will give his side confidence going into the match on Sunday.

Manchester United had a very convincing 0-5 win away in their Champions League Group match against Bayer Leverkusen to seal a spot in the knockout stage of the competition.

Manchester United is now unbeaten in their last 11 games and is now in the position of being able to concentrate on defending their Premiership title despite trailing leaders Arsenal by seven points.

The Red Devils travel to London this weekend knowing that they have not lost at White Hart Lane since 2001.

Manchester United did not look sharp against Cardiff City in their 2-2 draw last weekend, and despite a brilliant result in Germany, I think AVB has a point to prove.

During the first half of the game against City Spurs played really well and should never have been trailing 3-0 yet the difference was every time City attacked they scored.

Spurs have not been playing bad football this season but have been unable to score, and while £26 million signing Roberto Soldado does not look to be the answer the club still has plenty of other players capable of scoring.

I will be betting Spurs to come good against United, especially of Robin van Persie does not play with odds of 9/5 2.62