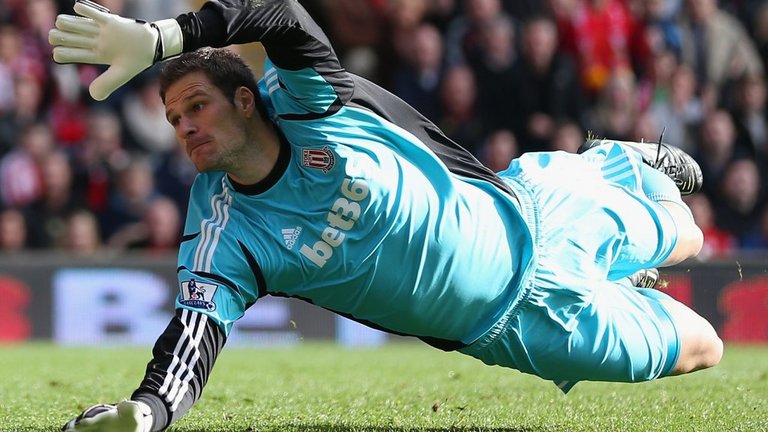 In what could be a sign that he is about to leave the Britannia Stadium, Stoke manager mark Hughes dropped his normal No.1 goalkeeper Asmir Begovic for last Saturdays match against Swansea, and played Jack Butland in the Potters nets.

The 27-year-old Bosnian international only has one year remaining on his contract and has captured the attention of both Arsenal and Liverpool.

The £15 million rated shot-stopper is due to hold talks with Stoke during the summer and was not even included on the bench for the trip to Liberty Stadium.

Stoke sits comfortably in mid-table which prompted Hughes to give Butland some game time ahead of this summer’s European U-21 Championships.

“Asmir wants to play every game, but I explained the reasons behind my decision,” he said. “I’m very fortunate to have three excellent keepers, so whoever I pick I’m going to get a decent performance.

“It wasn’t a big decision. It was one of those where I felt it was the right thing to do.

“I spoke to Jack earlier in the year and said that if I felt there was an opportunity for me to give him game time then I’d do that.

“It was a good time because it was a game of significance, and he needs to be exposed to those games rather than dead rubbers.”

Butland just recently signed a new four-year contract with Stoke adding to the rumours that Begovic could leave.