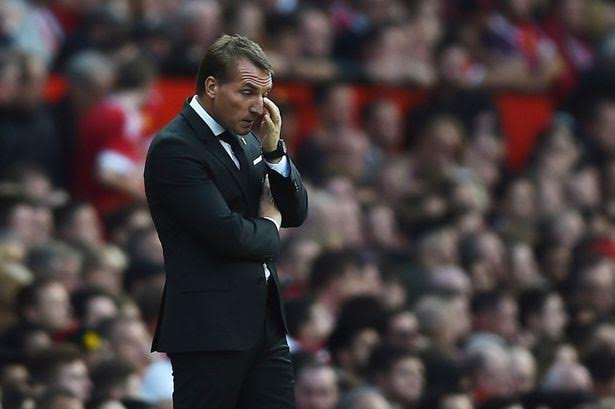 Despite having signed 17 new players in a year, Liverpool looks like a team all out to sea with a broken rudder and no direction to head in as a worried Brendan Rodgers looks on knowing that his experiment at Anfield is about to run out of time.

Up till now the clubs Boston owners have backed Rodgers, giving him the money he needs to build a new team in all expectations of Champions League football next season, and Rodgers knows that the Reds last two losses at home to West Ham and then the dreadful display against Manchester United now has him skating on thin Ice with a trio of experienced managers just waiting in the wings for the Americans to call.

In fact the game against United just about summed the team up as we got to watch a host of new faces who appeared to not know what to expect from their fellow teammates as Manchester United kept possession of the ball, while Liverpool players hopelessly ran around the pitch hoping for United to make a mistake.

When they did finally have the ball a small 27 % of the time according to first half statistics, all they could do was kick the ball up-field in the hope that Christian Benteke could find it, a style of playing that was a far cry from the exciting football Rodgers brought to Liverpool his first season in charge.

Following the match Rodgers said, with a sigh: “We have to be technically better, much better, in order to create the attacking momentum we want, we need to keep possession for longer periods.”

“We need to be much better in terms of showing the ball and wanting the ball. I like players to take initiative and be pro-active in the game, and we didn’t do that. You just get rid of the ball and it goes up to Christian and he’s on his own.

“I thought he was excellent given the service he had, but unless you can keep the ball to connect and play much higher up the pitch, he becomes isolated.”

The clock is now ticking for Rodgers to turn things around, but should this type of performance continue the Northern Irishman could very well find himself gone before Christmas.