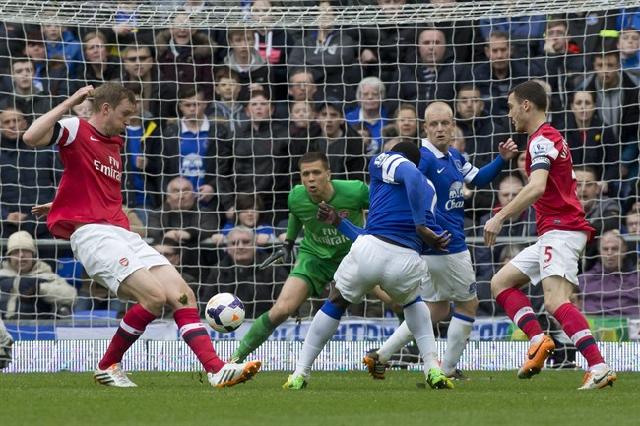 Arsenal goalkeeper Wojciech Szczesny has expressed his disappointment after the 3-0 loss against Everton at Goodison Park on Sunday and admits that their FA Cup semi-final against Wigan Athletic is now ‘massive’ in defining the season.

Despite being top of the table for much of the first half of the season, the Gunners are now struggling to hold onto fourth spot and Champions League football next season.

The Gunners are just one game away from an FA Cup final against either Hull City or Sheffield United and know that it will be their best chance of Silverware in nine years.

Speaking about Saturday’s semi-final against Wigan Szczesny told Sky Sports: “The FA Cup game becomes massive now. Obviously it is the only trophy we can win.

“It would be a massive boost for the club and a lift for the team if we could win it for the fans. We have plenty to play for still.

“We have an FA Cup semi-final and we are still in fourth in the Premier League so it is up to us to switch on very quickly, focus and forget about this.

“I think we have to put it behind us and switch on. I hope we can kick on and get back to where we want to be.”

The Gunners have been in the Champions League for the last 16 years and the Polish international hopes this experience will give them the edge over Everton adding: “We can do it. We have people who have been there and know how to do it.

“We have managed to do it every single time in the past, so even though we have not been at our very best, we know we can pick ourselves up and still get there.

“The defeat against Everton hurts of course. It was bad. But we have experience in getting into the top four, and that will help us this time.”