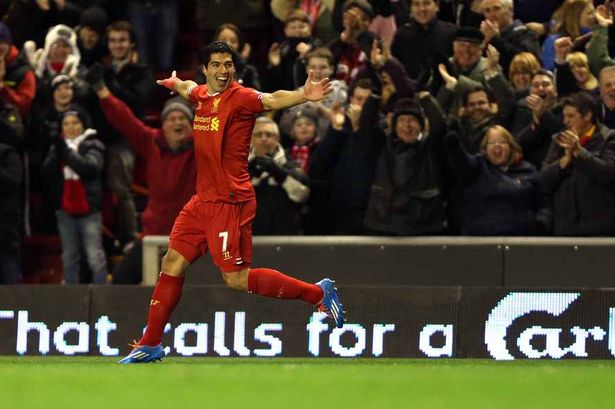 Liverpool leading goal scorer Luis Suarez has admitted he never thought that Liverpool would be competing for this season’s Premiership title.

Currently the Reds are top of the table five-points clear of Chelsea who they play this Sunday at Anfield in what will be a crucial match for both teams.

Suarez also thinks that winning the title by Liverpool will be even sweater knowing that the club did not have to spend big to do as well as they have done telling Sky Sports.

“To win the title would be something that no one would believe,” he said.

“The truth is we’re surprised ourselves at how well we’re playing. We have good players who are demonstrating why they are playing for Liverpool.

“It would be something amazing because of the investment made by Chelsea, Manchester City and Arsenal. Even Tottenham have spent over £100m.

“We, with so little investment, are in this position. It would be incredible.

“Now that has happened and now we are top of the table, we are going to try and take advantage. We want everyone to feel our presence in all the games.

“But, if we don’t win it, we will try again next year. We have realised this year that, with these players, it is possible.”

Despite renewed interest from Spain the Uruguay international is not planning to move on, adding: “For me the Premier League is the best in the world.

“You will see Norwich, Cardiff, and Crystal Palace against any big team and you will see crowded stadiums, people living the game with passion.

“In that moment you realise that, in the Premier League, you cannot relax at any time. All the games are played at the top level and that is the beauty of it.”