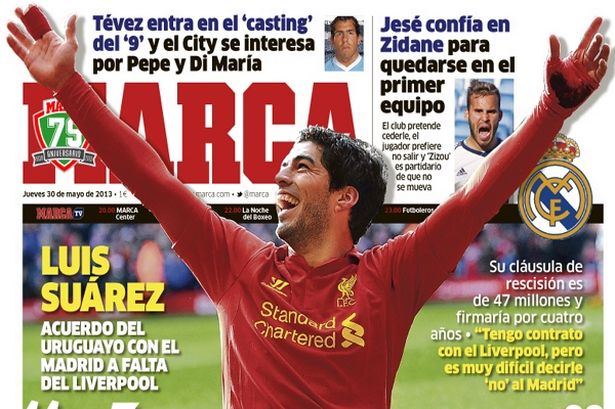 Wow! The rumors are flying fast and furious now as the Spanish Daily sports newspaper MARCA prints on its front page that Real Madrid have signed Luis Suarez for £40 million on a four year contract.
Marca are the Madrid mouthpiece so there has to be something to the story after already reporting a few days ago that there had been contact made between the club and Suarez.
The deal is nothing new. It was reached some weeks ago. On one hand, there were the player’s agents led by Pere Guardiola, Pep’s brother and on the other, Florentino Pérez’s envoys in these matters, the Money men. It’s a done deal.
As far as MARCA knows, the deal – which we must clarify, has not been finalised – would be for four years and would include a significant pay-rise for the player, as per the position he would play in, that of a Real Madrid centre-forward.
Luis Suárez’s contract contains a £40m – just under €47m – buy-out clause. A price that the Reds are not prepared to lower.
In other words, that is what it is going to cost Real Madrid if it wants to sign ‘Lucho’ Suárez. Nobody expects Liverpool to lower its asking price by even one euro, because the English side does not want to part with its player.
Obviously, Suárez wants to play in the Spanish league. Aside from his footballing reasons, he is not having an easy time in the Premier League. He is currently serving a Ten-match ban following his latest controversy with Ivanovic.
It has to be pointed out today the Pere Guardiola said on Sky Sports that Suaerez was staying at Liverpool, more news is sure to follow soon!