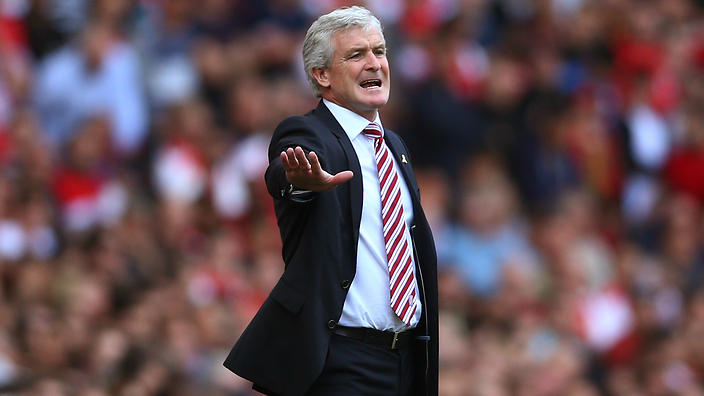 Hughes was fuming after during his post match press conference following the 0-0 draw at the Britannia Stadium yesterday afternoon saying: “I’ve just heard Arsene say he was a bit surprised that we went direct. I’m not quite sure what game he’s been watching, but there we go.

“I don’t think there was a yellow card. I don’t know why the physical aspect of the game has to be mentioned.

“We approached the game in the right manner, got the ball down and passed and moved and mixed things up.

“I thought it was a good football game with both teams trying to play and win a key Premier League game. That’s certainly what we were doing.”

Previously Wenger has accused Stokes players as being Rugby players rather than footballers, and said it was a “battle” just to come away with a share of the points.

“Overall it was a battle – an old fashioned Stoke battle because they made the game very physical,” he said.

“The crowd was up for it, the players were up for it. They went for a very direct game and we had to show a physical response, solidarity, fighting spirit, togetherness, which we did.”

Wenger also hit out at the home fans for their chant of “Aaron Ramsey, he walks with a limp” reminding the travelling Gooners that Ryan Shawcross broke his leg here in 2010.

“When people get together sometimes they forget their individual responsibility,” he said. “Maybe when you go home and watch it on television you are less proud.”