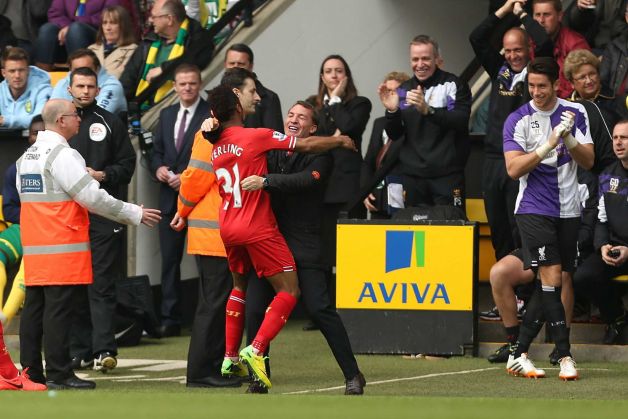 Anyone who watched the 19-year-olds screaming opening goal for Liverpool in their match against Norwich and the fact that he set up Luis Suarez for the second before then scoring again for Liverpool’s third will have no arguments with Rodgers when he says the youngster is one of Europe’s top talents.

Despite Luis Suarez being the first player to score 30 goals in a season since Ian Rush, Rodgers saved most of his praise for Sterling telling the Daily Star: “I think he is arguably the best young player in Europe at the moment, and he is still only 19. It is ridiculous.

“He is just an incredibly talented young player but apart from his skills the things that I have been most impressed with is his sheer football intelligence.

“He has been playing recently for us at the tip of a midfield diamond, just behind the front players, when he used to be known as just a regular wide player.

“But he has shown this season that he is so much more than that and I think he can become a really great player. He really is something to see.

“His second goal, when he ran more than half the length of the pitch before scoring, was fantastic and his ball to Luis Suarez for his goal, phew, that was the pass of a top midfield player.”

The Liverpool boss also told of how he had put the words of Margaret Aspinall who lost a son at the Hillsbourgh disaster on the dressing room wall in three languages to inspire the players after the 25th anniversary of the disaster: “Stress is difficult – but stress is also good. It gives you a determination to fight.”

Rodgers said: “We stuck her words up on the dressing room wall before the game and I think it definitely helped to inspire the players.

“In the end it was a brilliant win for us. We were relentless in the way we dominated and controlled the game in the first half.

“Then Norwich scored and got some momentum but we showed character and resilience.

“Everybody dug in and fought for the points so it was an incredible win for us.”

Rodgers then still had a little time left to pay tribute to Suarez saying:

“It’s been a long time since someone scored 30 league goals for us. But Luis is a talisman, a real inspiration,” he added.

“It a great personal achievement for him but I think he has still got a few more goals left in him this season.”