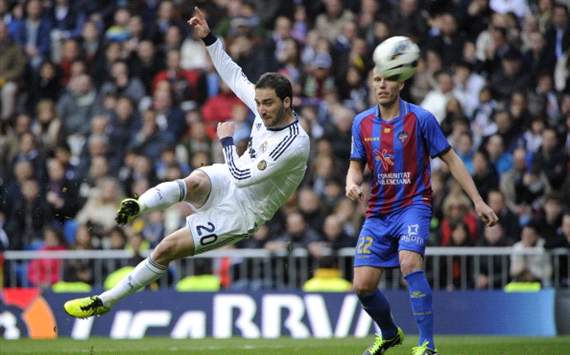 Personal terms agreed with Bernabeu striker who could be set to make Emirates Stadium move.

The North London club will stump up €22m (£18.6m) for the 25 year old and the Bernabeu striker has agreed terms with the Emirates Stadium side and therefore one would imagine this deal is all but done, at least according to this source.

Higuain has struggled to retain a regular first team spot since Jose Mourinho took over at Real Madrid, with Karim Benzema getting the lions share of the striking duties over recent seasons.

Thus far this season the former River Plate man has been handed just 16 La Liga starts but has still managed to net 13 goals in Spain’s top tier. The French born striker moved to Real Madrid in December 2006 and has racked up 119 goals in 262 appearances for the Spanish giants.

Arsene Wenger has been linked with a number of possible striker additions and there is no doubt that the Arsenal boss could do with a more prolific presence up front, with neither Olivier Giroud or Lukas Podolski scoring with the regularity of former sharp-shooter Robin Van Persie.

The fee Arsenal are ready to pay, though seemingly a very decent price for a player of Higuain’s ability and experience, would represent a club record for the Gunners and would no doubt be a signing the club’s supporters would welcome with open arms.