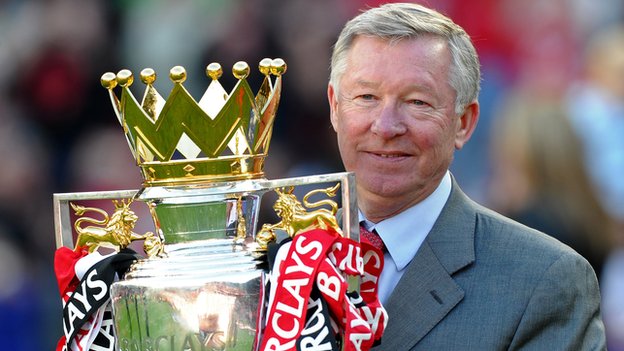 Sir Alex Ferguson will step down as Manchester United manager at the end of the season after 26 years in charge.

The Scot, 71, has won 38 trophies since taking over from Ron Atkinson on 6 November 1986, including this season’s Premier League title.

“The decision to retire is one that I have thought a great deal about. It is the right time,” Ferguson said.

“It was important to me to leave an organisation in the strongest possible shape and I believe I have done so.

“The quality of this league-winning squad, and the balance of ages within it, bodes well for continued success at the highest level whilst the structure of the youth set-up will ensure that the long-term future of the club remains a bright one.”

Ferguson, who will take on the dual role of director and ambassador for United, praised the people he felt helped him build the club into one of the biggest in the world.

“I must pay tribute to my family, their love and support has been essential,” he added.

“My wife Cathy has been the key figure throughout my career, providing a bedrock of both stability and encouragement. Words are not enough to express what this has meant to me.

“As for my players and staff, past and present, I would like to thank them all for a staggering level of professional conduct and dedication that has helped to deliver so many memorable triumphs. Without their contribution the history of this great club would not be as rich.

“In my early years, the backing of the board, and Sir Bobby Charlton in particular, gave me the confidence and time to build a football club, rather than just a football team.

“Over the past decade, the Glazer family have provided me with the platform to manage Manchester United to the best of my ability and I have been extremely fortunate to have worked with a talented and trustworthy Chief Executive in David Gill. I am truly grateful to all of them.

“To the fans, thank you. The support you have provided over the years has been truly humbling. It has been an honour and an enormous privilege to have had the opportunity to lead your club and I have treasured my time as manager of Manchester United.”

Ferguson is the most successful manager in the history of the British game and famously won a treble in 1999.

He is undergoing a hip operation during the summer.

Bookmakers have made Everton manager David Moyes odds-on favourite to take over at Old Trafford.

The Scot is out of contract in the summer at Goodison Park having delayed talks on a new deal until the end of the season.

Ferguson gave no indication he was thinking over his future when writing Sunday’s programme notes against Chelsea.

He said: “I certainly don’t have any plans at the moment to walk away from what I believe will be something special.”

But rumours of his retirement filtered out after the club’s end-of-season players versus coaches golf day at Dunham Massey, Greater Manchester on Tuesday afternoon.