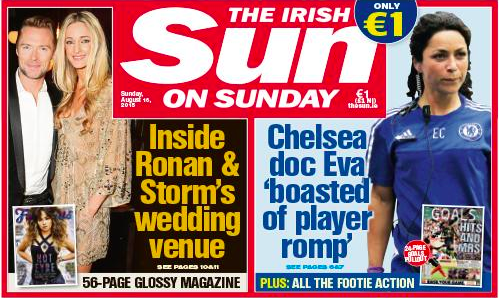 Leave it to The Sun Tabloid to try and find dirt on Chelsea Doctor Eva Carneiro this weekend, as the Blues prepare to play Manchester City at the Etihad.

The Blues Doctor and Physio Jon Fearn have been in the news all week after a furious Jose Mourinho chastised the two, and banned them from the game day bench for reducing the team to nine players last week, when they rushed onto the pitch to treat a supposedly injured Eden Hazard.

Most of the footballing world, and press sided with the Doctor for just doing her job and came down hard on Mourinho, who has now had to backtrack and make the match day ban just for today’s game against City.

The Sun however has now launched a personal attack on Carneiro claiming she had an affair with a Chelsea player.

Former boyfriend Rupert Patterson-Ward spilled all the juicy details to the British tabloid saying: This woman ruined my life. Eva would blurt out she had slept with one of the players during heated rows. She said it just to make me feel bad. I don’t believe it was true.

She prides herself on being popular among the players. Eva loved the attention.

Eva is a very sexual woman and not many people know the real her. She’s ruthless and gets whatever and whoever she wants. I was besotted with her and we were planning a family, but she chewed me up and spat me out.

Eva loved sex. It was so important to her. We would have sex every single day.

Funnily enough nothing has yet been found on Physio Jon Fearn, but we are sure the Sun and their disgusting way of reporting is looking hard for any dirt they can find.