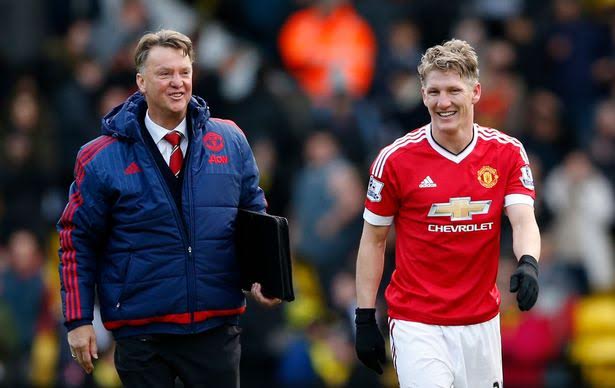 Manchester United travels to Germany knowing that they need a win against Wolfsburg to advance to the knockout stage of the Champions League.

With team captain Wayne Rooney unavailable for the crunch match, manager Louis van Gaal has tasked midfielder Bastian Schweinsteiger with the job of leading the team to victory in the Volkswagen Arena.

Despite Red Devils boss Louis van Gaal already writing off his clubs chances of winning the Champions League, World Cup winner Schweinsteiger still feels they have a place to play in the competition.

“I hope there are many more seasons to come with United and there’s still more to achieve in the competition,” said Schweinsteiger, ahead of the biggest game of Van Gaal’s 18-month tenure.

“I feel very good at the moment. We have experience in the team and we have young players with quality in the team.

“So, if we do our job well in the group, then I think we can achieve a lot.

“I want to win titles and I think United is also used to winning titles, so that is definitely my goal.

“But for those types of moments, we all have to work very hard together and always try to improve ourselves. Hopefully we will get there.”

Speaking of his decision to sign the former Bayern Munich star during the summer LVG said: “The reason why we have bought Schweinsteiger is that he is a player who can lead or guide a team. That is important – not only his football qualities – but that he can lead and guide a team on the pitch.

“I believe that every match that he plays he can play better because until now we have not seen the best Schweinsteiger that I have seen at Bayern Munich, but he can guide the team.”

IF there was any good news to be had for United’s injury ravaged team it is that Wolfsburg’s 29 match unbeaten run in the Bundesliga came to an end last weekend with the Wolves losing 2-1 to Borussia Dortmund.