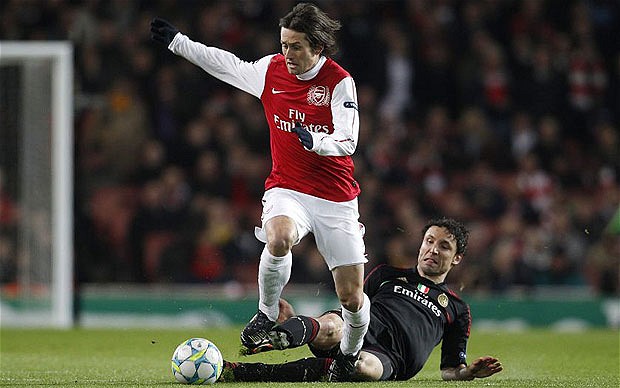 Arsenal’s midfielder and Czech captain Tomas Rosicky has again expressed his unhappiness at his lack of playing time since the season commenced.

The 34 year old who happens to be the oldest player in the Arsenal squad has barely featured this season.

He had expressed the same feeling back in September when he was away on international duty, with the hope that things would improve, but two months on, nothing has changed, and he has again expressed frustration that he has not been involved much this season.

The situation the Czech captain is currently facing is the same being faced by Lukas Podolski and Joel Campbell.

And the continuous irony of the situation is that Arsene Wenger has complained that some of his players looked jaded at the end of matches, and yet he is never open to rotate his squad neither does he make substitutions earlier to freshen things up, what it means is that the situation has left many players with a distinct lack of playing time, and they have taken every opportunity to express their frustrations.

His only start this season has come in the Capital One Cup against Southampton in September, where he was the captain of the side. His other appearances have been restricted to the odd five minutes there, and ten minutes here late in Premier League matches.

His present mood could best be captured by his reaction after Arsenal rescued a late win over Anderlecht in the Champions League in Brussels. He was the only player that did not show any emotions after the late goal.

“I’m not sure what’s going on,” he told the Czech press.

“I understand that I am 34 years old and that it probably plays a role whether I like it or not. That’s without a doubt. However, I’m not in physical decline.

“When I played for the national team against Holland I ran 12km and according to the tests at Arsenal I’m in the top five in terms of speed.”

“We are on good terms, so I do not really know what it is. It is purely a coach’s decision. I’m not on decline. My health is fine too. Of course I want to play, but there’s so much I can do about it.”

On whether Arsene Wenger’s switch to a 4-4-2 formation in the last couple of weeks could have had something to do with his lack of playing time, he replied thus

“It’s possible. Compared to last season we’ve changed the system and again have started played 4-4-2. The coach is trying to fins a system that best suits the players.

“I’m not in this alone; there are other players in a similar boat. When we do get a chance it’s harder for us to get into our rhythm.”

“So far this season has been disappointing for us. We haven’t played well and when I’ve played I’ve not been at the forefront of things.”

Inevitably, he was asked about his future particularly as the January transfer window is just few months away, and whether he would be seeking a move away from the Emirates.

“Sparta Prague will for me always be something I’m asked about because I’m a huge fan, but at the moment it’s not on the cards.”

This is the second time in two months that he has bared his mind on his situation at Arsenal, and once again he mentioned the fact that the team was not playing well, just as he mentioned back in September.

He is not particularly rocking the boat, but he is simply pointing out the fact that a fair chance should at least be given. If the team was playing well, the voice of discontent from the players that have not featured much would have been whispers. But players like Santi Cazorla and Aaron Ramsey should give way for other players as they have been below par this season.

Again the buck stops with Arsene Wenger. Why the Frenchman seldom rotates his squad nobody knows.