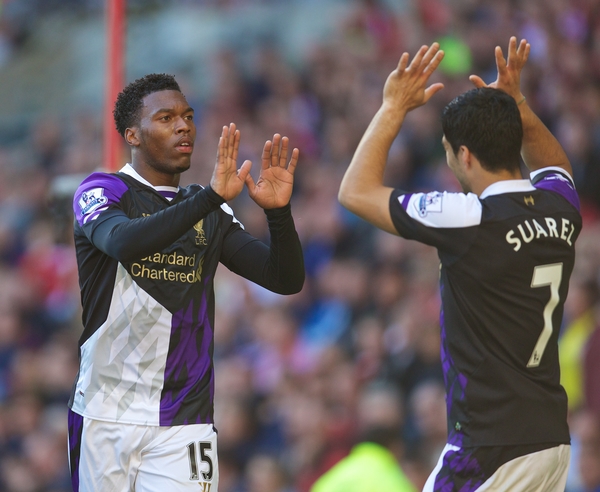 Liverpool moved second in the table yesterday following the 3-1 win over Sunderland in the Stadium of Light, that saw Daniel Sturridge score one goal and set up Luis Suarez for two prompting Liverpool manager Brendan Rodgers to call the pair the best in the league.

“He’s getting the reward for his hard work over the period that he was off. I thought he was excellent the other night at Old Trafford,” Rodgers told Sky Sports.

“Him and Daniel up front are a real, real handful. They combined very well.”

Rodgers added: “I am not sure there are two better in the league, in all honesty.

“There are some wonderful partnerships around – you have got [Robin] Van Persie and [Wayne] Rooney up there, who are outstanding.

“We have changed the structure of our team a wee bit to allow us to pass it better – we have still got an awful of work to do – and also to fit in with the types of players we have.

“Those two are right up there with the best in the country and you saw that today.

“The [second] goal, Steven Gerrard makes an absolutely breathtaking pass out of pressure and Daniel’s touch, pace and power takes him in, and he has shown that quality just to roll the ball in for Luis to get his finish.

“Those two will only get better. You can see their understanding – we have done a lot of work with them together in training and they looked very, very bright today.

“They are two different types as well, which makes it hard for defenders because one has pace, one has power and two good feet, and the other is a wriggler and can shift his body very quickly and ends up in the box. The dynamics of them are very good.”

Rodgers was pleased that the team came back so well following their 1-0 loss to Manchester United in the Capital One Cup midweek.

“On the back of a really tough game where we played well during the week, today was always going to be physically demanding game for us,” he added.

“I thought the work we put into it was exceptional and to get the three goals and maybe a few more chances to score a few more.

“I thought we were really dangerous on the counter-attack and as a team we worked really, really hard.”