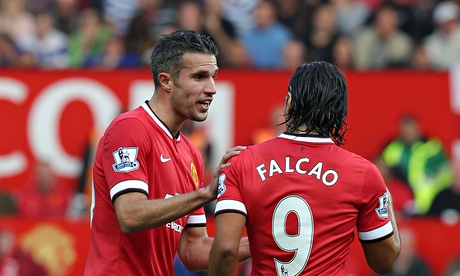 With the recent performance of Robin van Persie, many pundits have called for his ‘head’ and the fans even demanded for more.

Many of them couldn’t bear the ineptitude of the Dutchman especially as he has grown too goal shy.

His dip in form could have been masked if the duo of Radamel Falcao and Wayne Rooney hadn’t been absent for about three consecutive matches.

In the club’s last three matches, the midfielders laboured to break up play and sponsor attacking runs only for the woeful Robin to continually squander them.

Back in his country rumours of his imminent exit are gaining momentum as Soccer News have been relaying the reports of the Daily Fanatic which claims that Turkish giants Fernanbache require the services of the Dutchman who currently draws a £250k-a-week pay at Old Trafford.

The same source also claim that fellow country man Dirk Kuyt could be instrumental in the process of luring the veteran to Fernanbache while some other sources have also revealed that initial negotiation have in fact commenced between the club and van Persie’s agents.

If the heavy rumours are anything to go by, then Fernanbache could be preparing a bid to price him away from Old Trafford as soon as January, although if need be, they could also settle for a move next summer.

Another source, Fanatik claims that the Turkish outfit have been told to exercise some patience as Manchester United appear not to be interested in selling the 31-year-old.

While it is true that van Persie’s form is drastically dwindling down, he is still in the manager’s good books, because at a time when Radamel Falcao was fit and available, the team still had to endure a lethargic performance from the Dutchman.

He has the ability no doubt and is always a threat to even the best defenders but at the level that the club is presently, the last thing the fans need is someone who would miss the few chances that the team can muster.

Since the game against West Bromwich Albion, Robin van Persie has missed about six clear chances which could have earned the club at least six points from their last 3 matches as against the 2 they eventually secured.

Will Louis van Gaal do business? The answer to that question is a resounding NO.

I believe his admiration for Robin surpasses the ‘countryman’ nepotism especially if you consider what happened at the World Cup where despite Robin’s frustrating display, the manager continued to field him ahead of a more promising Huntelaar, as such I expect that Radamel Falcao will have to endure more of what Huntelaar faced.

More so, Louis van Gaal is on a low supply of strikers and that is the reason why Van Persie has been getting plenty of game time in the first place.

Apart from the injured Radamel Falcao and Wayne Rooney who just returned after a long ban, it remains only James Wilson who is talented and promising but lacks the experience to feature in more demanding matches.

So if Fernanbache will get van Persie, it would depend on a few things, firstly, if they can offer a tempting offer and secondly if Louis van Gaal gets another striker by January.