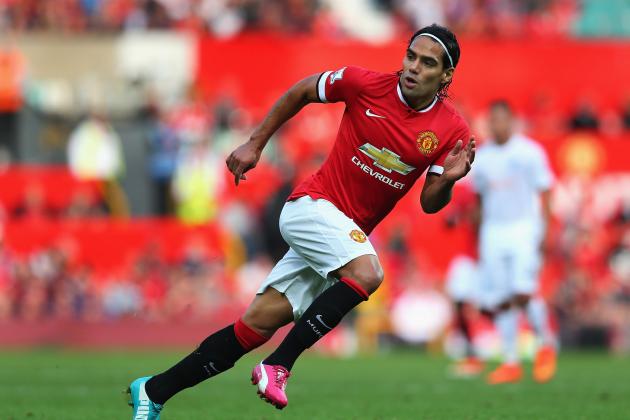 Manchester United’s temporary signing Radamel Falcao might miss what could have been his first Manchester derby as rumours filtering in from Colombia indicate that the striker has suffered a muscle injury.

Falcao who was expected to lead the Colombian team to the recently concluded World Cup in Brazil was dropped after he sustained an injury and it was James Rodriguez who had the centre stage for the South Americans.

Immediately reports confirmed that the striker would miss the Chelsea game, Gol Caracol a foremost media house in Colombia contacted his Manchester employers and later revealed that Falcao received a knock in training coupled with a badly bruised calf, although there were still worries that he might have also suffered a muscle strain but that Manchester United were preparing to conduct a scan as soon as the swelling subsided.

Another Colombian source El Tempo and Futbol Red say that a Manchester based source said ‘what Falcao has is a muscle injury, which will mean he has one, or maximum two, weeks of incapacity. Fortunately, it’s nothing serious, it’s nothing so big.

In as much as Louis van Gaal will like to get Falcao back to full fitness in time for the Manchester derby especially with the uninspiring manner with which Robin van Persie conducts himself upfront, muscle injuries can be very volatile and the club will want to tread cautiously seeing as the strikers French employers will also be keeping tabs on the situation.

Radamel Falcao has thus become the latest addition to the Manchester United’s injury list, and as the manager will be welcoming players such as Ander Herrera, Michael Carrick and probably Phil Jones, he’ll still have to make do with what Wayne Rooney who is now available after serving a three match ban will bring to the attack.

However, Falcao is a fighter and could surprise even himself to come back in time to face the Champions.

It will be recalled that at the period when he arrived at Old Trafford, he was just recovering from the injury that ruled him out of the World Cup but even with that, the forward showed poise, determination and resilience with the way he performed in the little time that the manager had afforded him and also gotten a goal.

It will be wonderful to have the Colombian available for the debut as the team could use his strength especially with a defence that boasts of the likes of Vincent Kompany and even if he doesn’t make the starting line-up, he will surely come off the bench probably when the City defenders are wearing out.