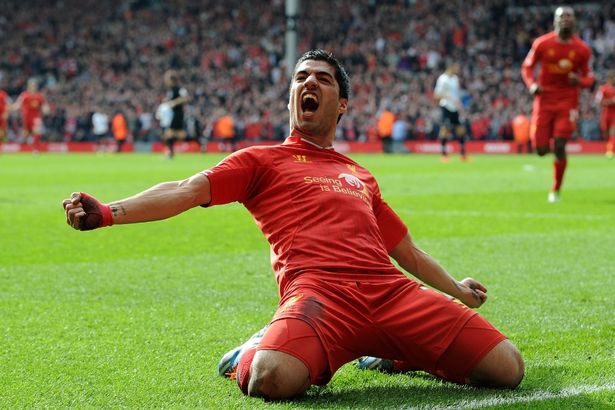 According to the Sun newspaper and Christian Bailey writing for football website caught offside Real Madrid trainer Carlo Ancelotti has been given the green light by the money men to offer £90 million for Liverpool star striker Luis Suarez.

The inform Uruguayan striker has been pivotal in Liverpool’s success this season after not only leading the Premiership in goals having scored 29 goals but also in assists with 12.

The plan for Ancelotti is to use the 27-year-old as a central striker with Cristiano Ronaldo and Gareth Bale on the wings.

To fund the move Madrid would almost certainly have to sell a few players also which would probably consist of goalkeeper Iker Casillas along with defenders Coentao and Raphael Varane.

The Italian would also be open to offers for Sami Khedira and Angel Di Maria while completing the sale of young striker Alvaro Morata to Arsenal in a deal both clubs have been trying to put together since January.

The question now is after having guided Liverpool to the Champions League would Suarez abandon them for the bright lights of Madrid?

This is something that real Madrid president Florentino is confident of seeing to fruition knowing that Suarez has always wanted to play for Los Blancos and that no matter what the American owners might think about their star asset they are also businessmen and would sell if the price was right.