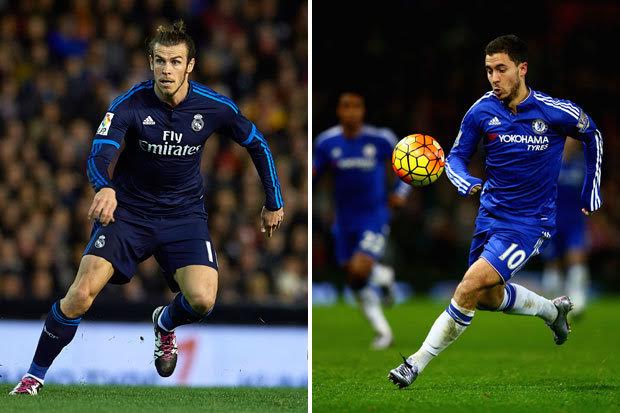 The future of Chelsea attacking midfielder Eden Hazard has been cast into doubt now that World Cup legend Zinedine Zidane is in charge at Real Madrid.

New boss Zidane is known to be a huge admirer of the Chelsea midfielder having been quoted as once saying.

“After Lionel Messi and Cristiano Ronaldo, Hazard is my favourite player,” revealed Zidane. “It is spectacular to see him play.

“Do I see him going to Real Madrid? I love the player, that’s all I will say.”

Meanwhile this season Hazard has looked the shadow of the player he was last year when winning the PFA Player of the year award, while this term he is yet to score a solitary goal for the Blues.

As Chelsea prepares for what is expected to be a bid in the region of £100 million for the 24-year-old, Zidane taking over at the Santiago Bernabeu could have a direct impact on what happens to Manchester United target Gareth Bale.

Bale seems to be shocked over the sacking of Rafa Benitez in Madrid, which has United bosses speculating that they may now be able to lure the Welsh superstar to Old Trafford next summer.

One problem no one is considering however is that Real Madrid unlike many other clubs do not need to sell players for money, and with club president Florentino Perez still fuming over what happened when they tried to sign goalkeeper David De Gea from Manchester United last summer.

The general consensus at the moment is that they would prefer to let Bale join any other club rather than United, but with Frenchman Zidane now in charge his job will be to reassure Bale that he has a future with the Spanish giants.

When questioned yesterday about Bale’s future, Zidane said: “Gareth was disappointed with the sacking of Rafa because he was an important coach for him but I will treat him the same way Rafa.

“He is an important player and a key player for the squad. He’s phenomenal and we’re going to give him all the care and support he needs.”