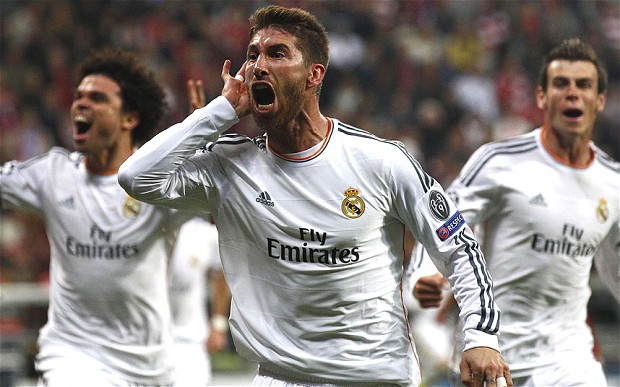 Real Madrid cruised by Bundesliga Champions Bayern Munich last night at the Allianz Arena in a one sided 0-4 win to book themselves a place in the final against either Chelsea or Atletico Madrid  who play each other Wednesday evening at Stamford Bridge in the second –leg of their semi-final match up.

Atletico knows that an away goal in this match could be vital if we are to see an all Spain final in Lisbon following on from the 0-0 result in the first leg at the Vicente Calderon in Madrid.

Bookmakers are scratching their heads over this one, but given the way Chelsea played beating Liverpool 0-2 over the weekend at Anfield a low scoring draw is on the cards so here at Soccer Transfers we will be betting a 1-1 result with a preferred partner that always has sites with the quickest payout available anywhere.

For Real Madrid it will be their first appearance in a Champions League final since 2002, thanks to Sergio Ramos who scored two powerful headers from set pieces to give the Spaniards an early lead before Cristiano Ronaldo finished off a fast counter attack when Bale squared the ball to him just outside the box to effectively finish the match at 0-3 for the visitors.

After half-time trainer Pep Guardiola brought on Javi Martinez for Mario Mandzukic but it was to no avail as the German could find no way through a well-organized Madrid defence.

Cristiano added to Bayern’s misery late on to give Los Blancos a 0-4 victory 5-0 on aggregate taking his goal tally to 16 goals in European competition two more that the previous record held by Barcelona’s Lionel Messi when he scored 14 goals during the 2011-2012 season.

This defeat will serve as a humiliation for Bayern Munich despite the club winning this seasons Bundesliga title in record time fans and the directors will only remember how they beat Barcelona 7-0 on aggregate in the semi-final before going on to beat fellow Germans Borussia Dortmund to lift the trophy for the fifth time last year.

The loss will now pose more questions about coach Pep Guardiola and his methods of trying to bring Tiki Taka football to the Allianz a style of play that went down well with Barcelona, but is disliked by Bayern Munich CEO Karl-Heinz Rummenigge.

Time will tell whether or not the Catalan will be in Bavaria next season especially with his old job at the Nou Camp possible vacant, but as for us at Soccer Transfers we will be rooting for a 1-1 draw when Diego Simeone’s men play Jose Mourinho Chelsea side to see who will Meet Real Madrid in the final on May 24th.