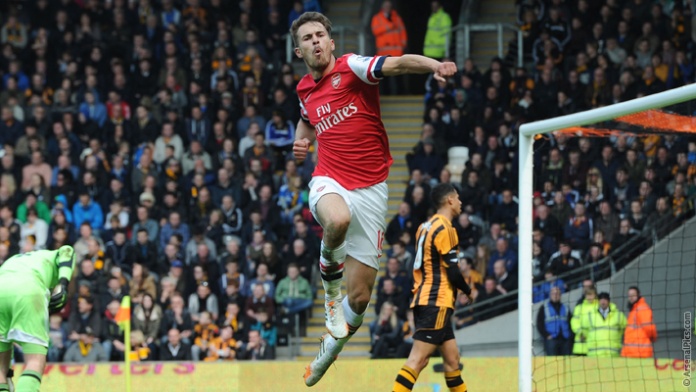 Following yesterday’s 3-0 win over Hull City Arsenal boss Arsene Wenger is hopeful that the gunners can now manage to hold on to 4th place in the Premiership.

Lukas Podolski scored twice for the second time in two matches following the opening goal from Aaron Ramsey that now sees the Gunners one point of Everton after the Toffee’s downed Manchester United 2-0 at Goodison Park.

The Gunners know however that nothing is settled yet and that they must continue winning their final matches to be assured of Champions League football.

“It was a very important win for us,” said Wenger to talkSPORT.

“We got a lucky result in midweek from Everton [who lost 3-2 to Crystal Palace] after we had a good game against West Ham.

“Mathematically it’s just about how well we play until the end of the season now.”

The Gunners boos is sure that Ramsey’s return will play a big role in how they finish the season.

“He’s in good form,” said Wenger. “I rested him against West Ham and today you could see he is back.

“We have missed Aaron Ramsey because he was out for three months and Mesut Özil had his first 60 minutes for six weeks so that gives us more offensive potential.”