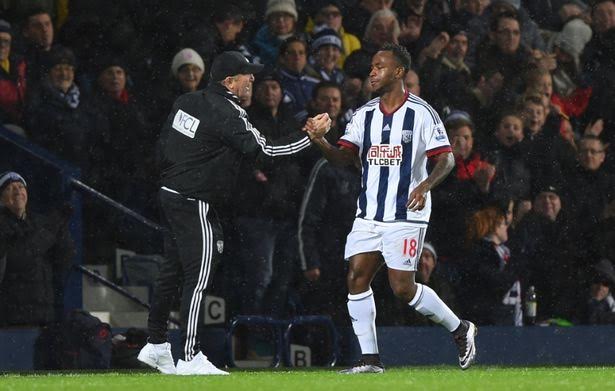 With Manchester United, Arsenal, Chelsea, Liverpool and Tottenham all in the market for a striker this January, you would think that England international, West Brom striker Saido Berahino would be in big demand.

The England U-21 star tried to push through a move to Tottenham during the summer, but was not allowed to leave the club by Baggies Chairman Jeremy Pearce, and subsequently benched by manager Tony Pulis for what was concerned to be traitorous behaviour.

West Brom however buoyed by the news that Chelsea are now considering a bid for their want away striker featured Berahino in last night’s 2-2 draw at Stamford Bridge.

Meanwhile Tottenham manager Mauricio Pochettino would still like to sign the 22-year-old to partner Spurs striker Harry Kane, but thinks that the £23 million the club offered West Brom last summer is now too much for a player who has spent the most part of the current season on the bench.

As things stand it is all a bit of a Mexican standoff, however we do believe Berahino will leave the Hawthorns this month, and it is only a question as to which side blinks first.

Meanwhile Newcastle United and Stoke City are also interested, but Berahino’s main reason for wanting to leave is to be able to play European football with one of the country’s biggest teams.