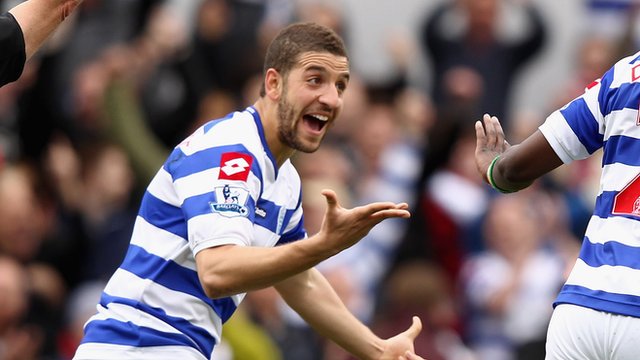 1 Tottenham’s was a mind-expanding triumph

The issue has been vexing André Villas-Boas. But for concessions after the 80-minute mark, Tottenham would be top of the league. And so the meticulous manager did what he does. He thought deeply and came up with a well-calibrated solution. The players were losing concentration late in matches so he tried “stimulating concentration in the last part of training”. How did he do it? “By increasing the complexity of the tasks the players have been doing at the end of training,” he said. “The more complex the exercise, the more concentration they need at the end.” They went from Connect Four to Jenga to Sudoku. Only joking. But they closed out a 1-0 win over Swansea. AVB was delighted. David Hytner

2 Defenders are having a laugh

There are no excuses for the manner in which Everton’s Marouane Fellaini attempted to take the law into his own hands when being held by Stoke’s Ryan Shawcross on Saturday, and the Belgium international will undoubtedly be punished appropriately, but the incident again highlights how much defenders get away with when defending set pieces in their own penalty areas. Referees seem to be at a loss in how to deal with the increasingly blatant holding and shirt-tugging that go on and in most cases settle for simply ignoring it. It is an argument for Uefa’s additional officials on the goalline to be introduced in the Premier League, though – unlike in European competition – they would need to be prepared to actually give a decision. Richard Rae

3 Knee-jerk judgments are dangerous and misleading

Vurnon Anita looked a little boy lost when he joined Newcastle from Ajax last summer. It was an impression reinforced by the fact that the midfielder is tiny but the £7m signing seemed entirely out of his depth in the Premier League. A few months of often painful acclimatisation, combined with plenty of patient coaching from Alan Pardew and his staff, have altered such impressions. Radically. Suddenly Anita’s passing and technical excellence are shining through. Granted, Newcastle lost 3-1 at home to Manchester City on Saturday but he challenged City’s Yaya Touré and Pablo Zabaleta for man of the match. As Pardew puts it: “Vurnon doesn’t get any taller; he’s still 4ft 3in but he’s growing into the shirt.” Patience really is a virtue. Louise Taylor

4 Time for a breather at Anfield

Amid deserved praise for Aston Villa’s performance at Anfield was surprise at how lethargic Liverpool looked, especially in midfield where Lucas Leiva showed the inevitable effects of returning from a three-month absence and Steven Gerrard, Joe Allen, Jonjo Shelvey and Raheem Sterling laboured against Barry Bannan and co. The benefits of a free midweek against a side who played in the Capital One Cup quarter-finals were not felt. Brendan Rodgers said: “There is no doubt Raheem is one who does need a breather. I’ve thought about it over the past couple of weeks. Joe is another one. If we’re honest, there are a few who could do with that breather, especially mentally. It’s something I need to have a look at.” Another problem confronting the Liverpool manager is whom to replace them with. Rodgers said: “You need to have that depth to take them out and put somebody else in. That’s something I’m thinking about – who to put in.” Andy Hunter

While Manchester City’s Roberto Mancini continues to juggle his strikers in search of the right formula, for Manchester United the Robin van Persie-Wayne Rooney axis evolves into a frightening partnership of devilry, intuition and goalscoring. The Liverpudlian is easing into high gear, registering five in his past three league games, with the third in the 3-1 win over Sunderland created by the Dutchman as their understanding threatens to disappear United into the distance in the title race. City, six points behind, could face an ever more unlikely game of catch-up to the 19-times champions unless Mancini finally decides to leave Mario Balotelli and Edin Dzeko on the bench and stick with Carlos Tevez and Sergio Agüero, the duo who again convinced in City’s 3-1 win at Newcastle United. Jamie Jackson

Credit where it’s due. Mark Hughes may not have got much right at Queens Park Rangers but the full-back Armand Traoré says Hughes is to thank for the consistency that Adel Taarabt has shown. “Mark Hughes had a big impact on him,” said Traoré, who has known Taarabt since the pair played together for France Under-19s. “[He] showed him how much of a good player he is and on the other hand he has to work hard. I think it was a really good step for Adel to have that manager.”

For all that, Hughes seldom played Taarabt in his best position, stationing him wide on the left rather than in the central creative role in which he revelled against Fulham. Taarabt fell out with his former national team manager Eric Gerets but was still taken to the 2012 Africa Cup of Nations (where he did not play a minute). Any QPR fans hoping that new Morocco manager, Rachid Taoussi, will not call him up for the 2013 edition that starts in January are likely to be disappointed. And with Taarabt on song, Morocco could go all the way, meaning QPR would miss their most reliable player for at least five matches. Moroccan glory could spell QPR relegation. Paul Doyle

After an unbeaten Premier League run stretching back to 6 October, Norwich City are seventh, heady heights indeed for Chris Hughton and his side who appear to be immune to second-season syndrome. The Christmas period poses a huge test, though – West Brom away, followed by Chelsea and Manchester City at home. But there is a spirit brewing at Carrow Road that Manchester United and Arsenal have already found too strong and a European place may not seem that whimsical an idea for Norwich when 2013 arrives. Robert Woodward

To a Brazilian the Club World Cup meant everything – the thousands of Corinthians fans in Yokohama showed that as did the reaction of Chelsea’s boys from Brazil. David Luiz and Ramires had to be consoled by their team-mates, with David Luiz admitting to having cried. Their misery was shared by compatriot Lucas Piazón but he didn’t stop at tears. The unused substitute found the defeat even harder to stomach and let the world know. “We didn’t have the desire to be champions,” he said, “only David Luiz and Ramires showed will power. The team went out on the pitch with no desire. It’s unacceptable.” Not bad for an 18-year-old surrounded by big-name team-mates, and telling it like it is will have at least alerted Rafael Benítez to the presence of a teenage tiger in Chelsea’s dispirited ranks. Nick Duxbury

There was a point in the first half when I thought that West Brom v West Ham might well be on course for the title of The Worst Game I’ve Ever Seen. Not in terms of technical ability – if you want to get technical about it there was plenty to admire in the techniques of individuals and the shape and discipline of both teams but not in terms of action, incident, or goal threat. As it was things perked up in the second half, so in the grand scheme of things I’ve mentally upgraded the game from potential Worst Ever to a perfectly respectable Rather Dull.

So this isn’t so much a talking point as a question: what’s the worst game you’ve ever seen? Not in terms of technical skill (you, almost certainly, will never have seen my season as a right-back for Melbourne under-14s) but in the wider scheme outlined above. It therefore can’t be a final of anything, because however poor it is, it’s of consequence, and it probably has to be a 0-0 (goals may be overrated but they’re certainly interesting). West Brom v West Ham definitely wasn’t mine (a Fulham v Tottenham cup game probably takes it, although there are several contenders) but what was yours? John Ashdown

For a bloke with a few bob, Tony Fernandes is easily pleased. “All I wanted for Christmas was three points,” the Queens Park Rangers owner said after their first win of the season against Fulham. It is hard to imagine him tucking into beans on toast on Christmas Day after unwrapping his only present of a pair of fingerless gloves but he really should be aiming higher … how about six, nine or 12 points from the festive period? Can’t see Harry Redknapp stopping at three points if asked what he would like from Santa. Premier League survival, an FA Cup final, Lionel Messi and his own Boeing Dreamliner would be just for starters. Nick Duxbury