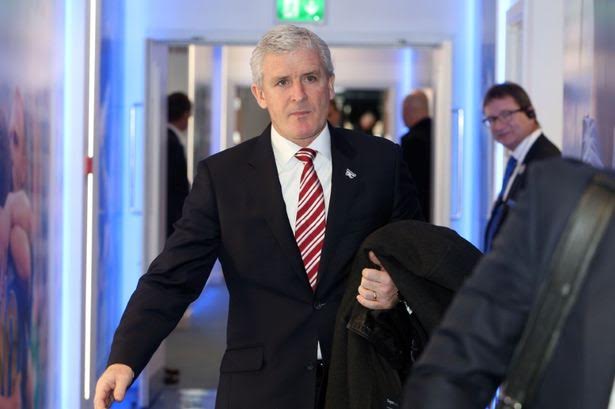 As Manchester United prepares to take on Stoke City tonight at Old Trafford, Potters boss Mark Hughes is hoping to use the Old Trafford faithful to his advantage by trying to make sure Louis van Gaal’s men get booed off the pitch at halftime.

There was a time not too long ago when teams feared playing at Old Trafford, but since the retirement of Sir Alex Ferguson the Theatre of Dreams no longer holds fear for the visiting team, a far cry from the Days when Hughes patrolled the pitch.

“Manchester United aren’t immune from having a little bit of anxiety in their play,” said Welshman Hughes.

“That can come from themselves in terms of their own form as players and that can be transmitted from the crowd as well, and by all accounts there has been frustration from the crowd.

“They’re very loyal fans, as I well know, and they don’t need too much encouragement to get behind their team.

“They want to see more attacking football, but sometimes you have to be a little bit more cautious in your approach. You have to go with your gut feeling.

“There are cautious managers and other managers, who are a little bit freer in going for games, but that can bite you as well because you can be exposed.

“Everybody approaches it in a different way.

“I have got too much on my plate to worry about Manchester United.

“I hope they put in a poor performance and get booed off again because that means we’ll have done well!”

Hughes believes that the fear factor of playing at Old Trafford no longer plays a part and is looking for Stoke to resister their first win there since 1976.

“I think a lot of teams similar to ourselves will back their ability against everybody,” said the Welshman.

“United at Old Trafford is an intimidating stage if you’re not confident in what you are doing.

“I used to look across to teams I was going up against when I was wearing a red shirt and you knew if you did your job right, you’d get it done.

“There is a little bit more uncertainty in this era. A lot of teams have a lot of good players and we feel we have good match winners.

“We’ve been able to address a lot of those long-standing records without a win and we won at Anfield last week.

“Probably United at Old Trafford, Arsenal at the Emirates and Chelsea at Stamford Bridge are the ones still standing.

“Hopefully we can chalk another one off the list.”