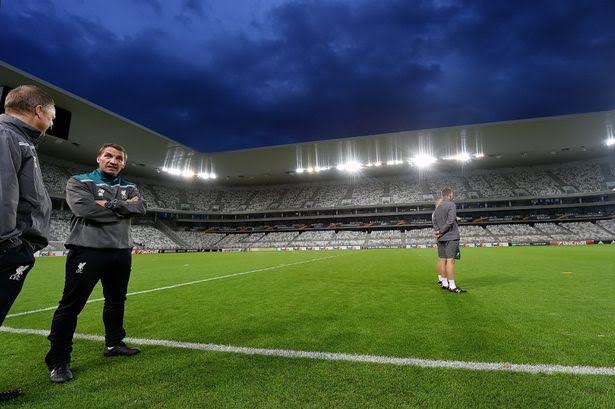 While speaking before Liverpool’s Europa league opener with Bordeaux in France tonight, Reds boss Brendan Rodgers has said his team will be playing for a win, and not just try to come away with a share of the points, while also admitting the club must get back to the attacking style of football they played two seasons ago that nearly won them the league.

Naming a four-man front line of Philippe Coutinho , Adam Lallana, Jordon Ibe and Divock Origi the Northern Irishman plans to take the game to the home side in an attempt to not only get Liverpool back to their winning ways, but to introduce the style of football the fans grew to expect under the 42-year-old manager.

“I can understand why people would say that,” he said in response to a question of whether his team has lost their attacking, possession-based identity. “But it’s good that I at least have an identity as a coach and that a way of working throughout my life is clear.

“I know we have to get back to that exciting way of working we have had for the past couple of seasons. I repeat, we have to ensure we reintroduce the way we have been working in the last few years.”

Liverpool goes into the game tonight on the back of two straight defeats, and while resting six first team players for next weekend’s home game with Norwich the Reds are planning an all-out assault against the Ligue 1 club.

“There’s no temptation to be cautious, no. It fits hand in glove in terms of how we want to work,” he admitted.

“We have seen in the last few performances when we don’t play so well and bring our ideas into the game, then we have far less chance of winning. So we have to get back to our way off working, and it gives us a greater chance to get results.

“The key thing is getting the performance level right. You can always lose a game, but it is how you lose them; and the last couple of defeats haven’t been ways you want to lose a game.

“Over the opening games we got some results but not been at that level of intensity of our game.

“We’re about being on the front foot and having that courage to play and play with that freedom but also a structure. That’s something we will really focus on.”