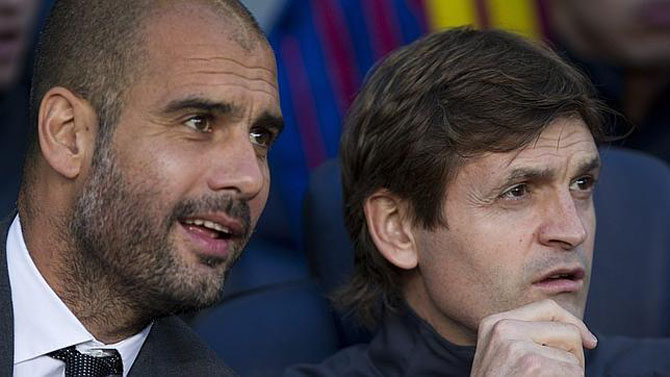 Bayern Munich manager Pep Guardiola has said the death of his friend Tito Vilanova will affect him for the rest of his life.

Vilanova died on Friday after a long struggle with cancer aged 45.

Together he and Guardiola won 14 trophies with Barcelona between 2008 and 2012 before Vilanova took over the team when Guardiola decided to have a year out from football.

“The sadness I feel will accompany me for the rest of my life,” said 43-year-old Guardiola.

“We have experienced a lot together, lost together, and won together. It is a difficult situation.”

The pair first came together as teenagers at Barcelona’s famed Masia academy starting what would be a lifelong friendship.

Their playing careers took different turns with Guardiola playing for the Barcelona first team while Vilanova spent most of his playing days in the Spanish second division playing for Celta Vigo and Mallorca.

When Guardiola was given his first managers job in charge of Barcelona B in 2007 he asked his friend to join him as his assistant.

Following the departure of then Barcelona trainer Frank Rijkaard a year later they took over the first team leading Barcelona to three Spanish titles and two Champions League crowns while dominating football both at home and in Europe.

Barcelona has called for three days of mourning ahead of Vilanova’s funeral on Monday to be held Spanish city’s cathedral.