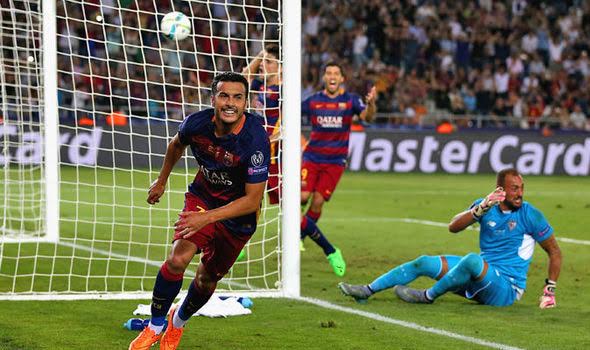 Barcelona forward Pedro has indicated that his desire was to always play for Barcelona, but the reality of the situation makes sense for him to move to Manchester.

The Spanish international came off the bench, for what could be his last game for Barcelona last night in Tbilisi to score the winning goal in a thrilling 5-4 Super Cup match between the Catalan giants and Europa Cup winners Sevilla.

When asked after the match if he still wanted to leave the Nou Camp, Pedro said: “The answer is no, but it’s complicated for many things.

“It’s not for money, as has been said – which is another lack of respect. It’s a question of continuity, of minutes.

“I’m an ambitious player. Stay or go, I will always be of this team.”

And while it is now expected that the 28-year-old World Cup winner will complete a £22 million move to Old Trafford, after the Red Devils agreed to trigger his release clause, it now appears as if Manchester City is to enter the race with what could prove to be a more lucrative offer.

When asked which club he was going to join Pedro gave nothing away only saying: “Manchester? Yes, there are nice challenges on all sides.”