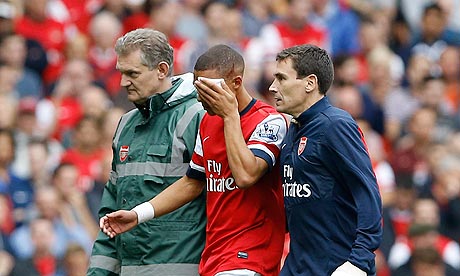 Arsenal have only three of their senior defenders fit and available to face bottom of the table Burnley at the Emirates on Saturday after Kieran Gibbs joined the Gunners list of injured players.

Arsenal was already short when it came to defenders after having failed to replace Thomas Vermaelen when the Belgium left the club to join Barcelona during the summer.

The injury list has now worsened this week with the injury to Gibbs which now leaves just Per Mertesacker, Calum Chambers and Nacho Monreal in Arsenals back line which could force Wenger to call up either Hector Bellerin or Isaac Hayden to make up the back four.

On a brighter note 25-year-old Theo Walcott is expected to make his return for the club after having been out for ten months after rupturing anterior cruciate ligaments whilst playing against Tottenham last January.