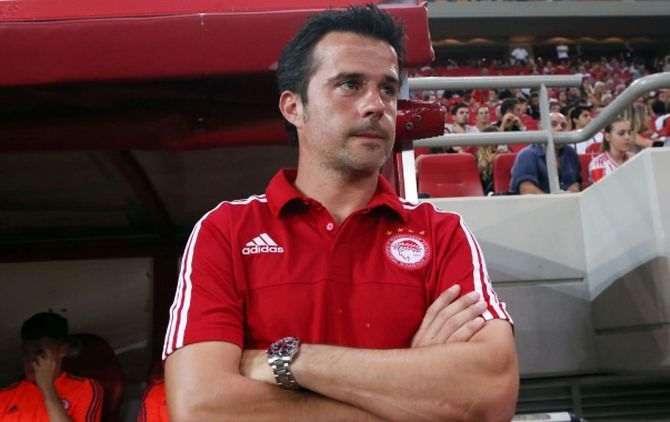 Olympiacos manager Marco Silva says his side is entering tonight’s Champions League clash with Arsenal in high spirits and believes that they can come away with a shock win.

The Greeks are unbeaten in their domestic league so far this season, yet despite 12 visits to play in cup competitions in England are yet to seal a victory.

Olympiacos lost their opening Champions League match against Bayern Munich 3-0 two weeks ago, and know that they must get a result against Arsenal if they have any chance of making it out of the Group stage of the competition.

‘We are prepared to get the best result we can. We know it will be a difficult game, how big a team Arsenal are and respect them, but we believe in our own strengths and are ready for a strong game,’ said the former Sporting Lisbon coach, who took charge of the Athens based club during the summer.

‘We are going to come here and show our best self, to show what we can do. We have analysed the jobs which Arsenal do well and will try not to make mistakes and match what we have done in training.’

After having lost their opening fixture to Dinamo Zagreb, Gunners boss Arsene Wenger knows that nothing but a win would leave Arsenal struggling to move on with the club still facing two games against Bundesliga Champions Bayern Munich.

Silva added: ‘If you asked people who would be the first two in the group, people would say it is Bayern and Arsenal, but football is not like this – there are no rules to say the favourites must win all of the games.’

‘We did not manage to win against Bayern, and yes the Dinamo win over Arsenal has made it more difficult for us, but we have our own ambitions and there are no limits to them. You have to go for it and we hope that we can change the situation in the group.’