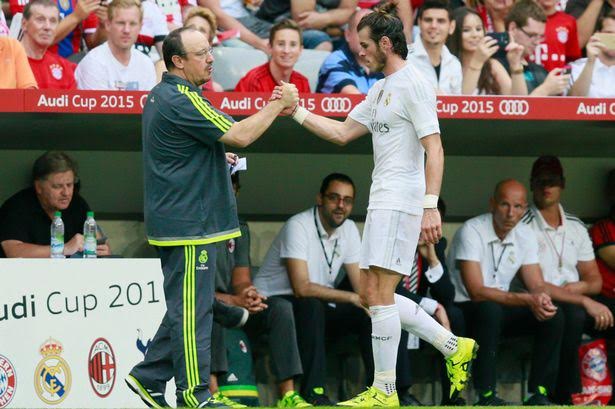 Real Madrid winger Gareth Bale was on display last night during the Audi Cup match with his former club Tottenham at the Allianz Arena in Munch in which Los Blanco’s won 2-0 with a goal from the Welshman playing in an unfamiliar central striker position.

Over the last few days there has been plenty of speculation linking Bale to a big money move to Manchester United, where new club sponsors Adidas are pushing the Reds Devils to make a poster boy signing.

Bale however seems to have crushed any hopes of a move to Old Trafford after talking about his determination to prove himself at Real Madrid.

“I am optimistic about the season. I am confident anyway.

“It’s great to have the support of the manager and the president and hopefully I can repay them now with some goals and trophies.

“I enjoy playing through the middle. It’s my best position. When I played for Tottenham I played my best football there.

“It definitely gives me more freedom. I can go out left, go out right and go through the centre. It’s where I want to play.

“When I play for Wales I play there and play my best football and hopefully I can do that this season.”

When talking about last nights goal and his refusal to celebrate Bale said: “Of course when you play against your former team it’s always a little bit weird, but it’s a pre-season game and the main thing for us was fitness.

“We came back from Australia only three days ago and we had three days off so coming into this was a bit difficult but it was good to get the win and it was nice to score.

“There are some familiar faces but there has been a lot of change.

“I know a few of the players staying in the same hotel so it’s nice to catch up with everybody and hopefully they will do well this season.”

When talking about his former club and their prospects for the new season Bale said: “They play some great stuff. They are a bit weary, they have got their first Premier League game this weekend so they are preparing for that.

“Hopefully, they can do well and qualify for the Champions League.”