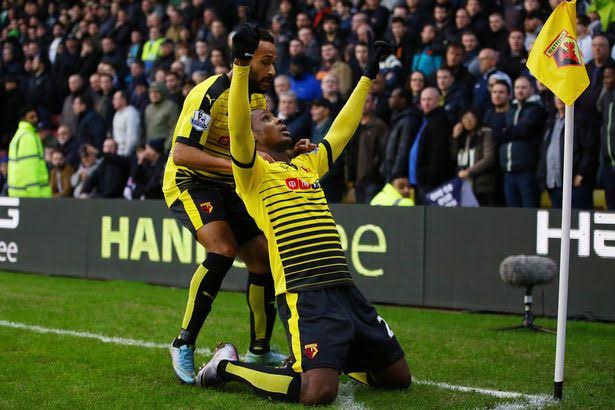 Watford star striker, Nigerian international Odion Ighalo appears to have sensationally, out of the blue opened the door on a move to Manchester United.

Ighalo has been in stunning form for the high-flying Hornets this season having already scored 14 goals in his Premier League debut to catch the attention of several of England’s top clubs.

Spanish La Liga side Atletico Madrid were thought to be ready to test Watford’s resolve to hang onto their star player next summer but now that the 26-year-old Lagos native has told British Daily tabloid the Sun via the Daily Mirror that a move to Old Trafford would be a dream come true all bets are off.

“There has been speculation from Spain and Italy but I’ve played there and now want to play in England,” he told The Sun.

“I don’t think I will be moving but I’m not sure I’d say no if United called.

“They were my team growing up. I loved watching Andy Cole and Dwight Yorke on TV.

“They were my idols and playing at Old Trafford has always been a dream.”