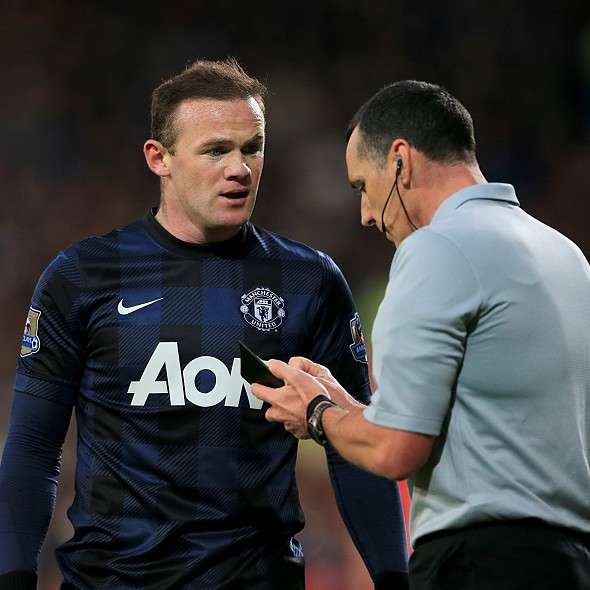 Manchester United striker Wayne Rooney was booked during his clubs 2-2 draw away to Cardiff City after appearing to kick a City midfielder.

United manager David Moyes believes there was no malice intended by Rooney saying: “The boy (Mutch) runs across his path and there’s a bit of a tussle, but I didn’t think it deserved any more than a yellow card.”

“I didn’t think it was a lash out to cause any harm, I think it was more of a disappointment that he lost the ball.”

Moyes was not happy with the way his side defended, and was frustrated when Cardiff midfielder Gary Medel did not get carded after appearing to hit Marouane Fellaini in the face.

“If he slaps someone in the face, then you’d expect some action to be taken. We actually lost our concentration because we were set up for the freekick, the referee then spends a minute or so talking to everyone and then sets it back up.

“We still should do better but it gave them two bites of the cherry as they did actually deliver the first ball,” he added.

“It gave (Peter) Whittingham another chance to get his sighters in and he certainly put in a good ball.”

Moyes’s opposite number Cardiff City manager Malky Mackay acknowledges that Fellaini had a part to play in it also telling Sky Sports:” He could (have been sent off) but then I also look at Fellaini and doing what he does normally and putting his head on someone else’s face, and that’s for me a sending off. So I think that’s something that needs to be looked at as well.

“Having seen the way Fellaini marked and used his arms at times in the game, not all the times but at certain points, but more so putting his head into someone’s face, I think that also justifies having a look at.

“But overall I’m happy that both teams deserved to have 11 men on the pitch. They didn’t deserve to have any men off and neither did we.”