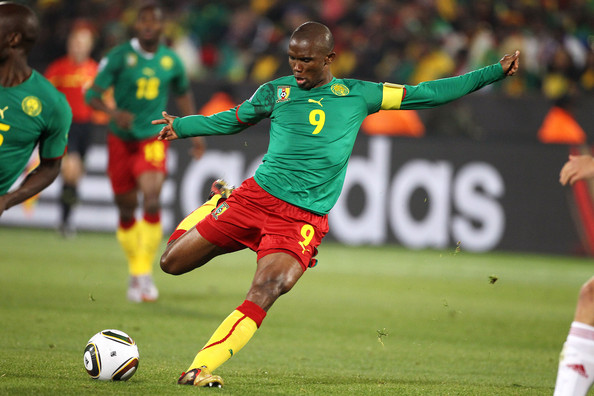 After years of commitment and dedication to the national team, Samuel Eto’o Fils retired from international football. After being stripped of the captaincy, the legendary striker decided it’s the right time to step down from the international scene.

Stephen M’bia was named as the new captain of the Cameroon national team on Tuesday.

It will go down as an exit of one of the finest footballers ever produced in Africa with Samuel Eto’o Fils having won the highest number of trophies as an African player.

Samuel Eto’o may have enjoyed so much success at the club level winning virtually every possible trophy but his international career produced little compared to that of club silverware although he enjoyed the earlier part of his career with Cameroon.

Samuel Eto’o made his international debut in March 1997 at the age of 15 in a 5-0 friendly loss to Costa Rica; he was the youngest player in the 1998 FIFA world cup in France.

Samuel Eto’o enjoyed a fruitful two years with Cameroon between 2000 and 2002. He was part of the team that defeated Nigeria in Lagos in the final of 2000 African Cup of Nations giving him his first taste of glory with the national team.

Later in 2000, Samuel Eto’o won the Olympic gold medal with Cameroon and also won the 2002 African Cup of Nations.

His partnership with Patrick Mboma was highly feared in Africa as both created an attacking threat to every defence they come against.

Although Samuel Eto’o Fils went on to represent Cameroon at the 2002 FIFA world cup in Korea/Japan scoring their only goal against Saudi Arabia, the team didn’t go past the first round.

Samuel Eto’o went on to play in the 2014 world cup after his country missed out of the 2006 and 2010 world cup in Germany and South Africa respectively.

Eto’o played just once at this the 2014 FIFA world cup where Cameroon lost all the group stage matches.

Samuel Eto’o was the African Cup of Nations highest goal scorer in 2006 and 2008.

His exploit in the African Cup of Nation makes him the all-time tournament highest goal scorer.

It’s of the opinion that Eto’o time at the top is nearing conclusion but with his recent move to Everton, the striker is set to prove critics wrong.