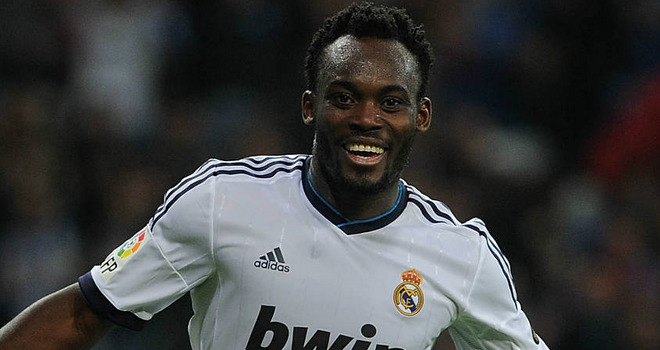 Michael Essien expects to be back at Chelsea next season, with his loan deal at Real Madrid set to expire in the summer.

The combative midfielder, who can also operate at full-back, was deemed surplus to requirements by the Blues in August after struggling with injury.

He was allowed to head for Spain on a season-long agreement, with Real boss Jose Mourinho delighted to snap up a man he made an integral part of his plans during his time at Stamford Bridge.

Essien has gone on to make close to 30 appearances for Real in all competitions this term, with his versatility and experience proving to be a useful asset.

It is, however, unlikely that his move will be made permanent and he is readying himself for a return to England – possibly to work under Mourinho again, as speculation continues to link him with a second spell at Chelsea.

“I have a contract at Chelsea and at present I am only on loan here, so nothing has changed,” Essien told The Sport Review.

The 30-year-old Ghana international claims he has been keeping a close eye on events at his parent club this season and believes they are capable of ending a frustrating campaign on a high.

He added: “They can still win trophies in the cups this season, so people shouldn’t write them off yet.

“I have followed Chelsea all season and although it hasn’t been as planned at the start of the season, I think it’s down to the fact that it is a transitional season.”